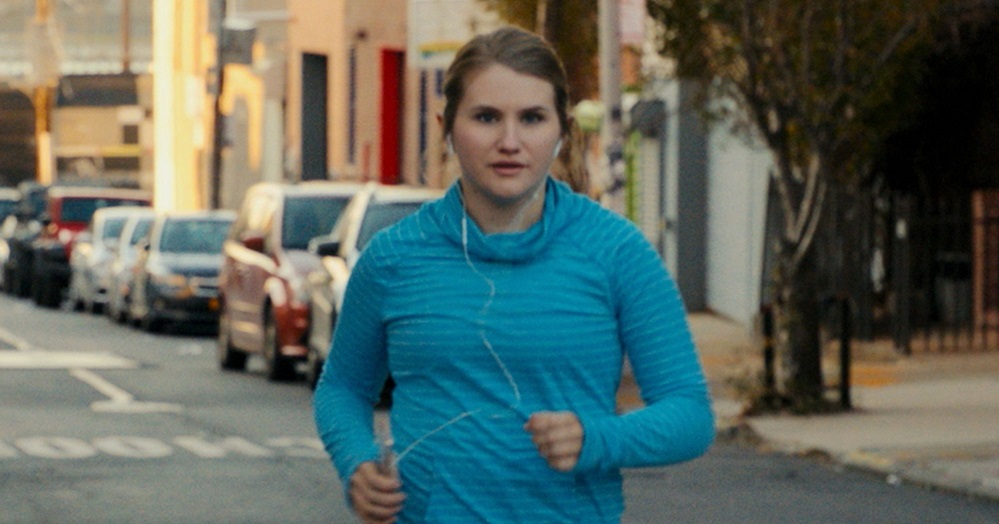 There’s a tonal asymmetry in writer/director Paul Downs Colaizzo’s Brittany Runs a Marathon. It feels like two completely detached films, at times a fun, lighthearted comedy with occasional jagged edges, other times a merciless character piece that has real venom. It’s something that typically only works either through clever writing or a star turn from the central performance. Brittany Runs a Marathon pulls off the latter through a powerful, sophisticated performance from character actress Jillian Bell.

Based on the true story of Colaizzo’s friend, Bell stars in the film’s title role. Brittany is a 28 year old hard-partying woman barely getting by in New York City. She smokes pot, drinks well into the night, is unreliable at work, and the closest thing she gets to a romantic partner is random hookups in nightclub bathrooms. When she tries to score Adderall from a doctor, she is told that she’s overweight, has high blood pressure, and her liver is in poor shape. She’s told she needs to lose 45-50 pounds and to dramatically change her lifestyle in order to get healthy. Which gets us to the actual plot (and title) of the film: Brittany taking up running and eventually forming the goal of running the New York City Marathon.

As to be expected in a film titled Brittany Runs a Marathon, Bell’s performance as Brittany is the centerpiece. Brittany is a rough character that is flawed in realistic, empathetic ways. She has trust issues. She chokes down her emotions and desires. She makes self-deprecating jokes in order to avoid other people making those same jokes at her expense. She’s the self-admitted “fat sidekick” of her wannabe instagram influencer friend. Brittany’s physical health is in bad shape, but her mental and emotional wellbeing are significantly worse off

Bell is a revelation in the role, having worked primarily as a side-character in comedies and doing bit roles in various films, this is her biggest acting challenge yet and she’s sensational. Even ignoring the Christian Bale/Robert De Niro-like body transformation that she underwent for the role, Bell captures the spirit of the character and sells every moment, regardless of how well written it is. She lands the comedy beats you’d expect, but it’s a rounded performance as Brittany has a dark ferocity and emotional callousness beneath her more bubbly surface. Bell carries the film even through its rough patches, never ceasing to be charming, funny, and brutally raw — whatever the film needs, she provides. It’s an impressive feat of acting.

If it seems like I’ve been overwhelmingly focused on Brittany and Bell’s performance, that’s because it’s far and away the best and most compelling elements of the film. Colaizzo’s screenplay definitely suffers from being a debut, as the film never figures out what to do with the myriad characters it sets up, leaving many of those actors hanging. There’s a lack of balance in Brittany Runs a Marathon, as elements are introduced into the narrative and then immediately dropped or forgotten. Colaizzo has enough visual panache—the first half of the movie has some clever use of filmmaking techniques to display Brittany’s physical and mental struggles—and his screenplay has plenty of wit, but it has perfectly normal debut feature problems. The pacing is wonky, the characters completely drop out and pop back into the film seemingly at random at times, and the film introduces the concept of bodily damage by over-exercising in the third act only to handwave it away during the film’s somewhat inert denouement.

But overall, Bell’s work is enough to carry Brittany across the finish line.1 Even when the jokes dry up and the cast of characters become more and more one-note, she’s enough to be engaging on her own. This is absolutely, 100% a showcase for her talents, and she delivers.

The Final JOKER Trailer Has Dropped Previous
Issa López and Guillermo del Toro are Teaming Up on... Next