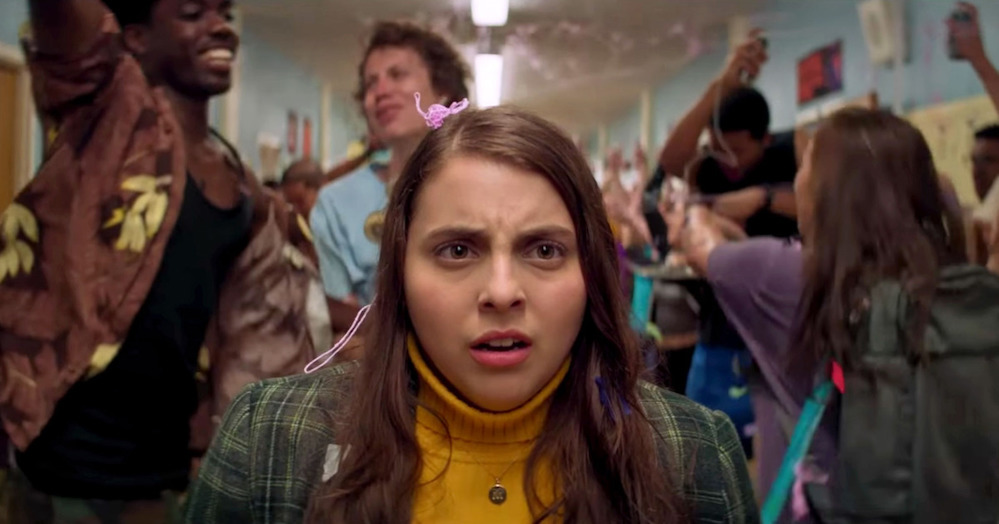 Booksmart is the closest anyone has ever gotten to describing what suburban youth felt like to me, what it tasted like, and what it looked like. It’s this feeling that life was charmed and full of possibility and the night could take you anywhere and you could be anyone, as long as you had your friends. It’s the taste of pool water and poorly mixed drinks. It’s the stolen glances, the color wheel of cars parked outside someone’s house, the pile of shoes at the door, the caravan of cars departing for a late night meal or to just hang out somewhere else.

Booksmart shows a specific suburban experience that I think still happens. It also happens to be hysterically funny, unapologetically feminist, and full of depth and awareness for how the end of high school represents a transition to a new, scary time and how female friendships are affected by this inevitability.

Beanie Feldstein and Kaitlyn Dever play Molly and Amy, respectively. They’re smart feminist girls who are inseparable best friends. They’ve spent four years studying hard to get into good schools (Yale for Molly, Columbia for Amy) but on the last day of school and the day before graduation, they find out that all of their hard-partying, popular peers have also gotten into great schools (except for Theo, who will work at Google for “mid-six figures”). Molly can’t stand the fact that she and Amy have “wasted” their time studying so hard when their classmates did the same but managed to have fun, too. The girls then commit to going to popular kid Nick’s last high school party.

Olivia Wilde is a phenomenal director. She is so assured of the movie’s tone and it informs the characters and their interactions so much. Each character’s introduction is a perfect encapsulation of who they appear to be but also how others see them. Molly listens to a motivational speaker (Maya Rudolph) who urges her to crush her competition. Amy rolls up in her Volvo station wagon and the two dance and one-up each other in their praise of each other’s outfits (it’s hard for me to describe how joyful this is and how every time they do this, it gets better and better). There were so many hilarious lines spit out rapid-fire that I can’t even begin to repeat them or keep up with them.

One of my favorite aspects about this movie is how it uses its fairly simple plot as a gateway to revealing deeper truths and themes about what it means to be a young woman, to be part of a friendship, and to be a teen in 2019. Full credit goes to Wilde, the four writers of the movie (Emily Halpern, Sarah Haskins, Susanna Fogel, and Katie Silberman), and Feldstein and Dever who anchor Molly and Amy with such authenticity.

One of these themes is the idea that you can spend almost every day of the last 4 years with people, and you still don’t really know much about them. It says much about how teens divide themselves and each other into buckets and labels, even while knowing that no one is easily defined at all. It allows for the movie to subvert the audience’s preconceptions about these characters. There aren’t any villains in this movie, just teens who don’t have it all figured out.

In the case of Amy, who came out as a lesbian two years ago, her primary concern is how to talk to her crush, Ryan, a skater girl with a smile she thinks lights up the world. She doesn’t even know if Ryan likes girls. In the world of Booksmart, Amy is accepted and loved for who she is, and she’s free to have the typical teen worries just like anyone else. But her uncertainty over Ryan’s feelings both allows her to indulge in fantasies that Ryan wants to see her at Nick’s party, and to rationalize it away as mere friendliness. It’s this uncertainty that underscores Amy’s motivations for going to the party to get some kind of closure.

Each student in the movie feels like a real person, even if their personalities aren’t completely sketched out. It’s enough to show that there’s palpable concern among some of them for how the end of high school will separate them, and they’ll be alone for the first time. Nick’s party is an opportunity to ignore those fears together for one more night, but it also becomes a breaking point for Amy and Molly, who are pushed to confront those fears directly if their friendship is going to last.

There are some standout characters, like Gigi (Billie Lourd) and Jared (Skyler Gisondo). Gigi is a wild, surreal rich girl who rides into school hanging off the side of a car that is decorated like if Guy Fieri and the cast of Miami Vice painted a car together. She is dressed in a light peach muppet-like fur coat, hair flowing under a matching, furry Kangol bucket hat, with big, round sunglasses on her face.

Her best friend is Jared, who is also absurdly wealthy and insecure and tries to buy everyone’s affection because he just wants to fit in. All anyone really knows about those two is that she’s crazy and he’s rich. Gigi and Jared are two sweet, strange people who have found each other. He says that Gigi is most loyal person he’s ever met. His insight pays off in surprising and wonderful ways because it enables him to pay it forward by being loyal to others, and the movie uses him to show that loyalty is the glue that holds together all friendships. Lourd and Gisondo are fantastic, showing vulnerability and awkwardness and developing the oddest, if not interesting, characters outside Amy and Molly.

It’s just one example of how Wilde and the writers not only understand the significance of high school in our lives but also how its impermanence affects friendships, and female ones most of all. She has centered two women in her story, to stunning effect. Unlike other movies about high school (such as She’s All That), Amy and Molly don’t need anyone else to validate how attractive, fun, or smart they are. They do that for themselves and for each other, and support each other in the way only best friends can.

The movie also takes time to introduce the potential for new friendships. Triple A (named so because she gave handjobs in a car, providing “roadside assistance”), is mean to Molly for acting like she is above them. It’s the reveal that Triple A is also going to Yale that sends Molly over the edge. When they finally talk again, it’s to offer an olive branch as a way of acknowledging that they may be able to help each other, or at least avoid sabotaging each other, at Yale. Amy has a confrontational moment with the resident beautiful mean girl and their verbal sparring illuminates a moment of clarity for both girls and how they’ve been stereotyping and making assumptions about others.

Wilde, Halpern, Haskins, Fogel, and Silberman have crafted an incredible movie on the suburban teen girl high school experience, but I admit this is subjective because it did remind me of my own high school years in some ways. It probably won’t remind others of theirs. For me, this movie resonated because it isn’t just about high school; it’s about how young women navigate change and figure out how to live apart from each other but still part of a whole. I had to do that in my own life with my own friends. Booksmart is an incredible movie, full of heart, devotion, chaos, and hilarity. It’s whip smart with its jokes and gags, it’ll leave you in stitches and tears, and it’ll make you want to call your best friend. Better yet, you should see this movie with your best friend.