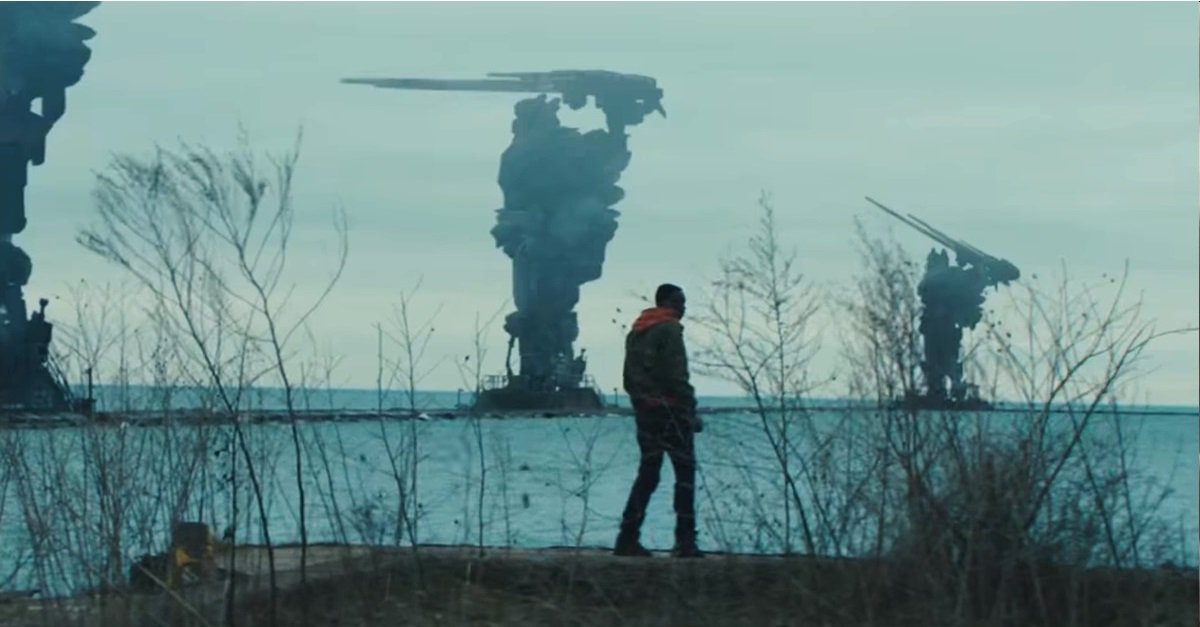 I’ve seen the sentiment a lot lately, said in many ways: “It’s hard for art to not be timely”. Everyone is affected by the inescapable clashes over the fundamental values and nature of our society – making art within that society will speak to those issues by dint of their mere existence.

It’s strange to think about that in terms of Captive State, the new movie about a near-future world that’s been taken over by mysterious aliens, who have turned Earth into a dictatorship and Chicago into a bombed-out war zone under space martial law.

The movie stars John Goodman as a muckity-muck in the aliens’ puppet government and Ashton Sanders (from the middle part of Moonlight) as a kid who wants to escape the dead-end neighborhood that got his brother killed by alien cops. You can tell that’s a story with a lot on its mind; a story trying to be on the cutting edge of the cultural conversation. Unfortunately, it ends up saying so much about so many things that the result is unintelligible. In trying to balance timeliness and timelessness, Captive State ends up not fitting in any time at all, especially not the spring of 2019.

Well the movie takes place in 2027, but we’re specifically told the alien invasion happens in late March of 2019, so we have that to look forward to in a couple weeks

One place it’s definitely trying to fit in is with the current boom of small genre movies that make a big impact: The sci-fi and horror and fantasy and thriller movies that make the most of their time on the screen. If these movies have memorable visual and dramatic concepts, they can earn a place in the cultural conversation on the same footing as the biggest of big-budget movies — how many people are still talking about Moon, and how many still discus Transformers: Revenge of the Fallen, which came out the same week?

And so we have Captive State clawing for space amid a half-dozen fantasy or sci-fi movies with hundred-million-dollar budgets. On paper, it makes a strong case for itself: The film is directed by Rupert Wyatt,1 who revitalized the moribund Planet of the Apes franchise with crucial assistance from Andy Serkis.

As with that movie, Wyatt is trying to balance the larger and smaller sides of sci-fi filmmaking, which gives us the grandiose premise of a future world where aliens have successfully taken over the world. I like the overarching concept that evil monsters ruling Earth doesn’t present humanity with new problems as much as make old problems worse: Discrimination, poverty, health, war, and so forth remain pretty similar, they just have slightly different repercussions considering, y’know, scary malevolent overlords.

I like the detail that aliens have knocked out most electronics, so people need to use pay phones and Polaroids and newspapers and the like.

Wyatt puts the legwork into establishing this occupied Earth with a thousand subtle touches — every frame bristles with careful design, the story gradually teases out the status quo in a naturalistic way, the actual plot is about character drama with the aliens as a separate encroaching force — all of which should theoretically be points in the movie’s favor. The problem is that these points always end up in opposition to each other, somehow. The devices and techniques and styles contradict and undercut each other, and the storytelling and emotion end up collapsing under all the design.

I’m getting a bit metaphorical here so I’ll cite some specifics. I like how Wyatt fills each set and shot with details that round out the world, but I can’t really appreciate it when almost every single shot is handheld shaky-cam so I can’t really focus on any of that detail. The actual designs of the evil aliens are pretty imaginative and creepy, but we only ever see them far away in dark corridors, to maintain the mystique and keep the effects budget down. The movie wants one of those big, perspective-shifting twist endings, but they’re doing so much to foreshadow that twist in the story structure that they might as well tell you outright.

This work at cross purposes ends up neutering the attempts at a theme, too. You’d figure that a story about a poor black teen trying to navigate a system that has it out for him would have a certain political alignment, but we’re expected to feel just as much sympathy for Goodman, playing a beneficiary and enforcer of that very same system, because the old white guys who never need to fear for their safety are just as heroic.

Of course, this isn’t the entirety of Goodman’s situation, but that’s an issue with that twist I mentioned.

The movie isn’t even their story, not entirely – there’s forty or fifty minutes right in the middle of the film where both these central characters go AWOL so a dozen characters we’ve never met can coordinate a carefully planned thriller/heist/action sequence where they disrupt a crucial alien event. Maybe if any actual characters were involved there would be some oomph behind it, but Sanders and Goodman are absolutely nowhere to be found, and it’s hard to cheer for all the granular successes and failures that make up the sequence, because you’re too busy trying to keep up with who’s who because you’ve never met any of these characters.

It’s an exciting sequence with a lot of really well-designed gizmos, and you can see what they’re trying to do thematically if you squint, giving deadly weight to the question of “What will you sacrifice for a righteous cause?”, but even then you run into more issues. The big alien event has been the main focus of the advertising, shot and edited to recall a Trump rally as much as they think they can get away with, but the big scary inversion of the real thing is that the aliens have banned Christianity, and practicing Christians have to live in fear at PureFlix movie levels.

These aren’t the kind of questions good SF leaves you asking, and so despite some excellent work, I can’t call Captive State good SF.

Review: THE MUSTANG Previous
Never Learn Not to Love the First Trailer for Quentin... Next