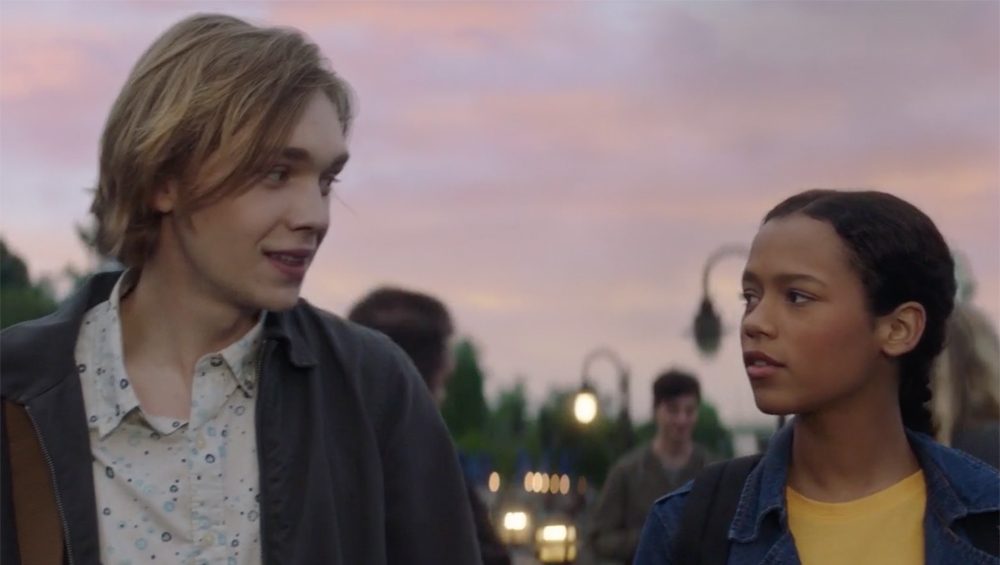 Editors Note: This film was reviewed via a digital screener, but will be released only in theaters. Due to the COVID-19 pandemic and the massive number of cases still ongoing in the United States, health professionals have recommended people do not go to the movies, as theaters are a potential hotspot for the spread. Please consider the health risks before going to see any film in theaters.

Young adult fiction loves to play in the waters of doomed teen lovers, often rehashing Romeo and Juliet but utilizing modern complications. Whether that’s A Walk to Remember or The Fault in Our Stars (or dating back to 1970 megahit Love Story), this often utilizes illnesses that drive a physical wedge between the central couple. Those examples all utilize cancer (or an unnamed illness that can either be described as “cancer” or “fridge-itis”) as the pivotal hardship, whereas Thor Freudenthal’s1 Words on Bathroom Walls — based on the novel by Julia Walton — is focused less on the terminal and more on the obstacles of a teenage romance potentially doomed by a misunderstood, but severe mental illness.

Diagnosed with schizophrenia as a young teen, we see the entire film through the eyes of Adam (Charlie Plummer). He narrates the film’s introduction through a framing of a therapy session, with the audience standing in as the unseen mental health professional. After being expelled from his high school and his family finding out about his illness, he is forced to attend a private catholic school in order to finish his diploma so that he can achieve his dream of going to culinary school. Cooking is the only thing that commands his attention and desires enough to shut out the voices in his head. At his new school, he begins being tutored by future valedictorian Maya (Taylor Russell) and the two form a rapport that grows into a romantic relationship, complicated by Charlie’s erratic behavior and refusal to reveal his condition.

As mentioned, Words on Bathroom Walls utilizes a third-wall-breaking framing device of a therapy session as a way of providing narration without it merely being a disembodied voice, spouting exposition. This allows Plummer and screenwriter Nick Naveda to be more playful and conversational through dialogue, rather than it just being dry, obvious, platitudinous speeches. We get a more snarky, honest and frustrated response to events, rather than just your run-of-the-mill observations. Visually and auditorily, the film effectively utilizes displays such as ominous black clouds, demonic-sounding modulated voices, and a handful of hallucinated characters to display Adam’s schizophrenia. These characters flesh out the paranoia, discomfort, and struggles to maintain control, providing “commentary” that puts us in his headspace in key moments.

This all (mostly, but we’ll get there) works because of the film’s performances. Charlie Plummer gets the bulk of the heavy lifting here, selling the role of someone dealing with his condition while also being convincing as a real, flesh-and-blood teenager — oftentimes these films fail at the latter aspect. Russell, coming off her stellar performance in Waves,2 provides a headstrong, confident and charming foil to Plummer. Adam’s mother is played by Molly Parker, who gets to give a solid “concerned, but determined mom” performance. She is paired with Walton Goggins, who plays Adam’s evil-but-not-really stepdad around whom the film’s best, most affecting turn comes, even if the turn is an obvious and well-worn trope. Also, Andy Garcia occasionally shows up as the catholic school’s head priest, effortlessly delivering lines of inspirational dialogue — and occasional jokes about masturbating in the confessional. This could play as cliche and banal, but his charisma and rapport with Plummer carry it.

The biggest problem with Words on Bathroom Walls is how trapped it feels by the Young Adult Fiction genre. It feels alive when it is subverting the cookie-cutter plot machinations of other novels and films of its ilk, but it can’t escape being another YA teen romance. Adam, who spends the entire film struggling with useless medications, irritating treatments, and debilitating side-effects, just kinda ends the film in a place where his condition is shrugged off. Characters stop feeling like real people and more like cyphers, losing their personalities and unique qualities in order to drop inspirational messages, which don’t fit the film that preceded. It feels almost like a betrayal of the film’s tone and exploration of the complexities of Adam’s predicament how easily the “happy ending” is achieved.

Words on Bathroom Walls has a lot to recommend. The performances are touching, it has a unique style that makes it feel fresher than these types of movies tend to be, and it has plenty of stylistic choices that really work. The script occasionally matches that cinematic verve and flair, but it can’t escape the YA romance genre’s narrative stranglehold. It’s frustrating because Words on Bathroom Walls gets so much right. The tired narrative choices really drag an otherwise solid film down and dull the otherwise fascinating character piece. It causes the film’s more complex, interesting dive into schizophrenia and how mental illness affects relationships to feel facile in the end.