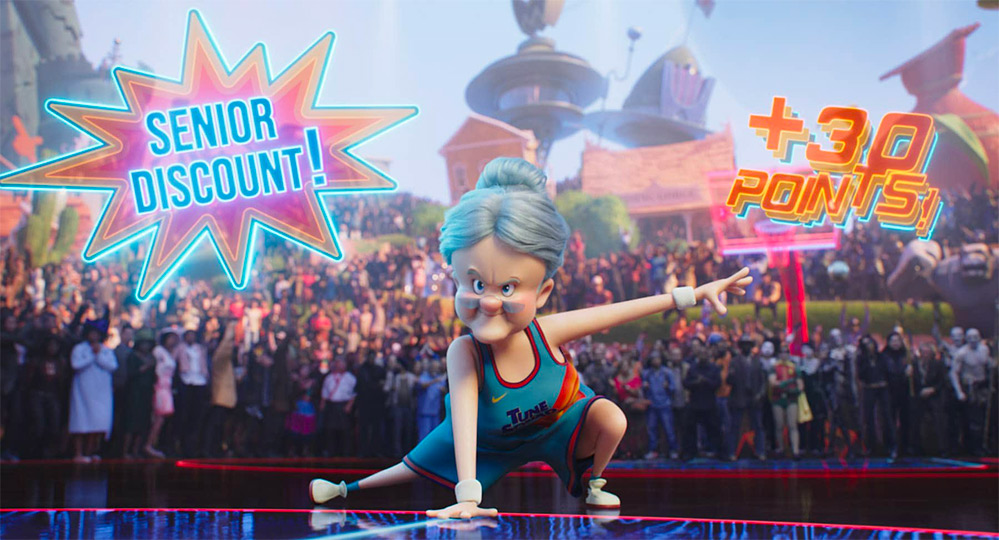 Look, I’m not going to lie, I loved Space Jam when I was a kid. I wasn’t born when the movie came out, but when I was a sports-obsessed child I got really into Michael Jordan and I watched the movie because why wouldn’t I watch a movie with Michael Jordan and the Looney Tunes characters in it? I watched it a billion times, and it was an integral part of young Maeve’s sports movie canon (other titles included Like Mike, Rookie of the Year, and Little Big League). But a few years ago, when I was in college, my friend dragged me to a screening at school and we both had the same realization that many people who grew up with the movie did: it’s not good. It’s not devoid of charms, but for a movie featuring the Looney Tunes, some of the funniest characters ever put to celluloid, it’s remarkably unfunny. And, to my sadness but not to my surprise, the Malcolm E. Lee-helmed Space Jam: A New Legacy, with LeBron James in the place of Jordan, is pretty much more of the same, except almost a half hour longer and updating the crass commercialism to fit the modern day version of it.

The movie starts by introducing us to arguably the most famous athlete in the world, LeBron James: Five-time NBA champion and idol of almost every child who’s ever picked up a basketball. But all is not perfect in Bron’s world. His relationship with his middle child, Dom (Cedric Joe) is strained; Dom is frustrated that his dad is focused more on making him the next part of a basketball family dynasty rather than letting him focus on his real interest, video game design. During a meeting at Warner Brothers, LeBron and Dom are digitized, kidnapped, and separated from each other by Al-G Rhythm (Don Cheadle), a malevolent artificial intelligence who resides in the WB server farm, who challenges King James to a basketball game in order to be reunited with his son. Launched through the “Server-verse,” LeBron finds his way to Bugs Bunny and they must create the most formidable team they can in order to go up against Al-G’s new Goon Squad, featuring avatars of Dom’s own design.

If this sounds weird and overly complicated, and also weirdly masturbatory for the studio that made it… it is. A large chunk of the movie is devoted to LeBron and Bugs Bunny taking an extended tour through multiple planets based on various Warner Brothers intellectual properties to find other members of the Looney Tunes (whom Al-G Rhythm split up in the past, seemingly out of personal distaste for them). The resulting scenes range from pat (Daffy Duck trying to join the Justice League on a planet dedicated to the Bruce Timm cartoon, Justice League) to strange (Granny and Speedy Gonzales beating up goons on a Matrix planet) to absolutely baffling in every way imaginable (the Tasmanian Devil being experimented on by the titular characters of Rick and Morty). None of these scenes, except for the Rick and Morty one, have any jokes. All of the supposed humor comes from either references to the material that these planets are based on or the absurdity of Foghorn Leghorn shouting “Winter is coming!” while fleeing a dragon on the Game of Thrones planet. While I’m sure these jokes killed in test screenings, it all seems really out of place in a PG-rated film ostensibly for families to have this much of the movie dedicated to referencing movies and shows that the audience is too young for and that is well before their time. The original Space Jam was bad and unfunny and had weird pop culture references, but compared to the sheer level of intellectual property onanism present in this sequence and the actual basketball game in the film’s second half, the two-second Pulp Fiction sight-gag in the first film feels like the Marx Brothers at their peak.

Speaking of the basketball game itself, it’s the one time the film’s live-action segments tries to be remotely visually interesting (the live-action scenes in the real world look like cheap TV at best), with James and the Tunes (turned into 3D by Al-G) facing off against the Goon Squad in a colorful, kinetic match where style points are as important as regular baskets and power-ups are all over the court. While the game displays a decent amount of creativity in both the concepts behind the individual avatars of the Goon Squad (all played by fellow basketball pros Anthony Davis, Damian Lillard, Klay Thompson, Diana Taurasi and Nneka Ogwumike) and in the gags pulled by the Toon Squad, the 3D Looney Tunes designs are just frustratingly ugly, with the Tunes themselves being grossed out by the change to the point where it reads to me like dysphoria. And despite decent concepts behind the gags, the designs are too weirdly realistic to the point where whenever something cartoony happens it feels out of place. And the less we talk about The Notorious P.I.G., the better.

If there’s any element I feel comfortable praising, it’s the quality of the 2D animation. You really get the feeling that the animators who worked on these segments of the movie were absolutely pumped to do so, relishing the budget they had and putting as much love and care into it as possible. As much as the initial segment of Bugs Bunny meeting LeBron just feels like a greatest hits reel of classic Looney Tunes episodes, the enthusiasm of the animators just feels contagious, making these scenes almost enjoyable in spite of what their ultimate place in the narrative is. It’s also fun seeing the various styles of 2D animation used clash against each other – the roundness of the Looney Tunes characters weirdly meshes well with the angular blockiness of the Bruce Timm aesthetic, for example. If there is one reason at all to watch this movie, it’s to see this unfortunately underused style on this budget level.

But alas, it’s probably not enough to recommend the movie as a whole. Except for the 2D animated scenes, it is all just kind of a slog. Even Don Cheadle, giving the biggest performance he possibly can, doesn’t feel like he’s having any fun, and LeBron James, who’s a capable actor in his own right, feels out of place. The film makes a lot more sense when you learn that the film’s original director, Terence Nance, left the project three weeks into shooting, because it feels like whatever freshness he brought to the table ended up being bowled over by a barrage of studio notes and lazy decisions. I really don’t think A New Legacy will have the afterlife that the original Space Jam had, because while that at least had a novelty to it, this one does not really have anything more than a few faint, unexplored ideas at its center. Your time is better spent elsewhere.

A Thunder of Jets in an Open Sky, A Streak of Gray and a Cheerful Hi