GAME OF THRONES Recap: “A Knight of the Seven Kingdoms” 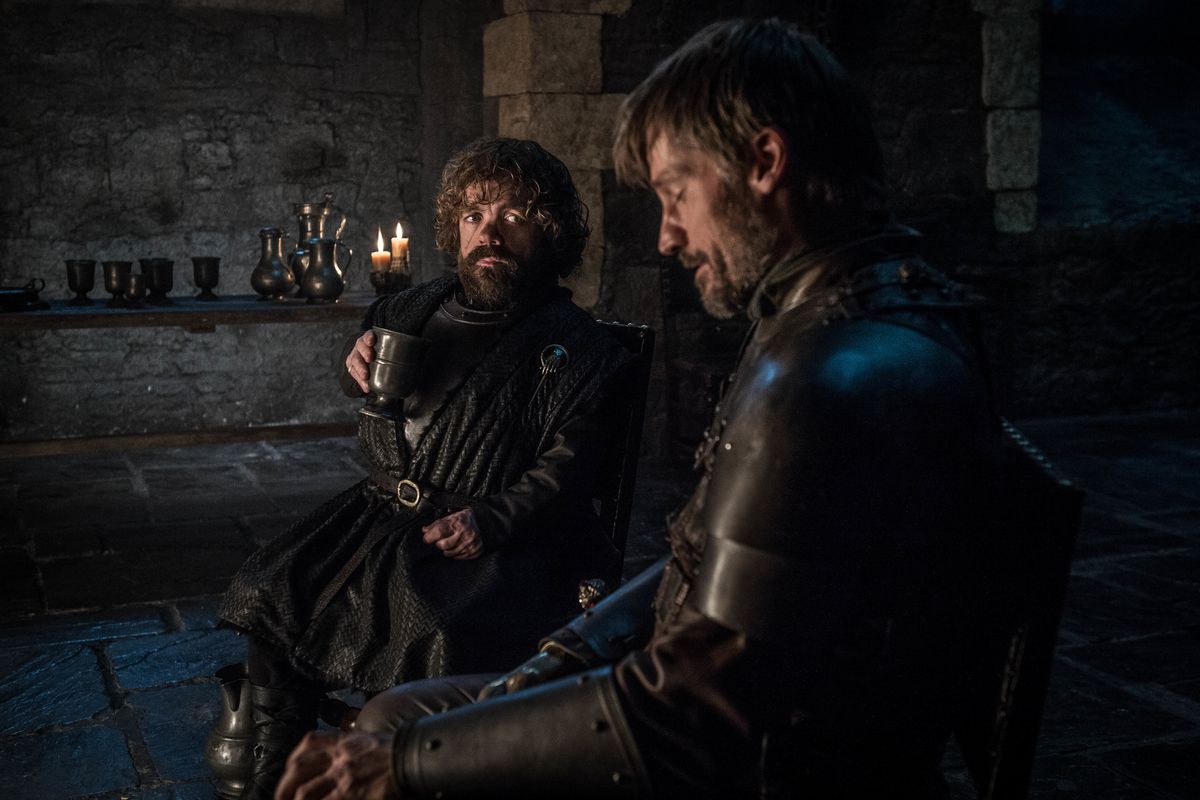 In “A Knight of the Seven Kingdoms” all of the action takes place in Winterfell, as some of our favorite characters finally meet for the first time. As you recall from the last episode, Jaime is in Winterfell now, arriving by himself and clearly without an army. Jaime, standing before Dany, Sansa, and Jon, knows he’s at their mercy. He’s visibly uncomfortable as he listens to Dany talk about how he murdered her father, and when Tyrion defends him, both men are fully aware that they are hobbled because Jaime hasn’t brought an army and Tyrion was fooled into believing there would be one. It would appear that Cersei has screwed them both over, until Brienne supports Jaime, winning Sansa’s vote.

It’s clear the big set piece for next episode is set in this one. Tormund arrives, telling Jon that they have little time before the white walkers arrive, and so the entire episode’s background activities are preparing for battle, giving each character an opportunity to address mistakes and give resolution to the actions that have set our heroes and villains on such a disastrous course from the first season.

Jaime was always really “that man who pushed Bran out of a window” to Bran but when Jaime apologizes, he finds absolution for his mistake. Even though Bran, for all intents and purposes isn’t even human anymore, the moment is poignant. Bran has already evolved beyond that moment, and this moment gives Jaime the capper to his evolution in the past 7 seasons.

A standout scene in this episode is Sansa and Dany’s conversation about family, what it’s like to rule as women, and Sansa’s concern that Jon is too easily manipulated. The scene stands out because there’s a ruthlessness boiling under the surface. These are two women who should not be trifled with; both have dealt with horrific things, and have emerged as survivors. The last 7 seasons have built to this interaction of a queen and a lady, both actual equals outside of title. If there is really going to be a fight for the iron throne, I would not count out Sansa.

Another reunion for this episode is for Theon and Sansa, who share a long, heartfelt hug. He’s come to fight for WInterfell and it’s clear he’s also looking for absolution. He was a key player in the fall of House Stark, after all. But more importantly, he’s the emotional support Sansa needed the last few seasons and so his return and acceptance into the kingdom (and into the castle war room) is already a reward. If Yara somehow takes back the Iron Islands, they’ll be formidable for when they take the battle to Cersei. I really hope Theon survives all of this. He deserves some happiness.

What’s especially fantastic about this episode is how there are a lot of emotional scenes between people who believe they’re likely to die but each character’s approach to that finality reflects the journey they’ve been on the last 7 seasons. Greyworm and Missandei have grown so much together, and their optimism means they spend their time talking about merging their two peoples and heading for the beaches. For her part, Arya has decided that that Gendry – in the parlance of our times –  is a snacc (true) and that her potential last night on the planet would be to finally act on such a snacc (though it’s clear Gendry is very much a willing participant after seeing those knife throws). That’s all I’m going to say about this matter, because it’s still awkward as hell but I’m glad those two got together, as foretold in the very first episode.

This episode also gives us these big damn hero moments, not in terms of an epic battle but in individuals finally connecting with each other on the eve of what could possibly be their final day together. Before the big battle, they gather in front of a fireplace to tell war stories, just reside in each others’ company, and to drink. But it also serves another purpose – it furthers Jaime and Brienne’s relationship. Throughout the series, Brienne has been loyal to many people, but her loyalty to Jaime has defined their relationship the past few seasons. So when Jaime tells her that he’s making her a knight, it brings her arc full circle to being what she had always wanted and also the symbolism of this man she clearly loves respecting her in such a way. David Benioff and D.B. Weiss have talked about Brienne having this deep love for Jaime, but I don’t think it’s one-sided at all. Brienne isn’t this young warrior with a crush like she used to be. I think Jaime probably does love her. At the very least, making her a knight is how he shows it.

The last big moment we have before the big battle is one between Dany and Jon, who finally tells her his real name and parentage. Emilia Clarke puts in such good work here, and the look on Dany’s face as the gears turn and she realizes that everything she’s worked for, all the pillaging and conquering, has now been potentially upended by her own lover/nephew – isn’t that just like getting passed up for a promotion even though you did all the work?

Next week is the beginning of the end, folks. It’s terrifying.

Things We're Digging This Week - Week of 4/15/19 Previous
Steve Rogers: Man Out of Time Next