GAME OF THRONES Recap: “The Last of the Starks” 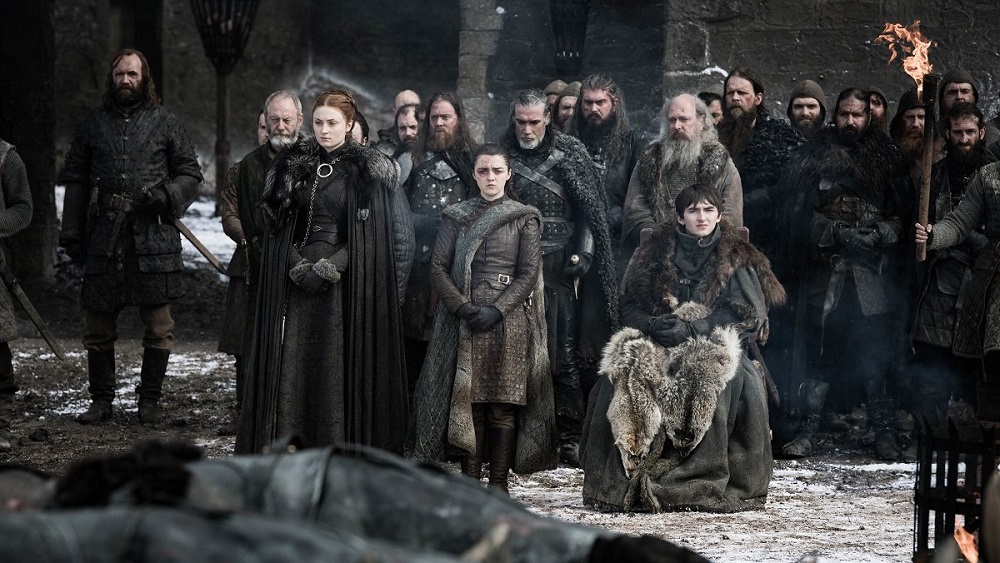 The Long Night is over, and the battle between the living and the dead has been won by the living, and we all know what that means… TIME FOR A TABLE SETTING EPISODE!! In all seriousness, while the previous sentence is true, the episode we got tonight was pretty good, and in this writer’s opinion it was a noticeable improvement over last week.

We are back at Winterfell, in the aftermath of the vicious (if not entirely visible) battle against the forces of the dead. We get a dramatic shot of all of the bodies being burned (side note: it totally took like a week to clean up all those bodies right? No way they actually did that in a day) and then head to the feast that follows. It provides us with probably the last moments of fun and happiness we are likely to get between now and the end of the show. Gendry gets legitimized as a Baratheon by Daenerys, and promptly ruins the mood by proposing to and being rejected by Arya.

Tyrion, Jaime, and Brienne play a drinking game, Pod does Pod things, and Tormund and Jon pal around like the low key bros they are. There’s also a bit of drama to mine from the festivities, as Tormund and Jon’s palling leads to Tormund refreshing Dany’s memory of Jon’s very real claim to the throne, and the even more real fact that people are drawn to him and love him in a way they will never love her. As the meal winds down we are also treated to an exceptional bit of fan service as Jaime and Brienne go ahead and do what a lot of fans have been begging for the last few seasons, and finally hook up.

After the celebrating is out of the way we move forward into the drama and intrigue that sets up the meat of the episode. We are treated to the first serious discussion of Jon’s claim to the throne since the big reveal, and Dany’s reaction to Jon is… concerning. It’s very clear that she cares of nothing but her (now dubious) first claim to the throne, telling Jon that any revelation to anyone of his parentage will ruin what they have, and she ignores his insistence that he lacks interest in the throne. She thought she had birthright, and her desire for the throne has taken precedence over their love, and more importantly, what matters to Jon. Her active attempts to wall him off from his family are chilling and it draws into question whether she can ever be anything but a petty tyrant like all the rest – a question this episode later seems to answer.

Jon, being Jon, isn’t going to lie to or side against Sansa and Arya, but he’s also in a position now where if he doesn’t address the rapidly mounting tension between them and Dany, he risks losing everyone. Thus comes what may be the most fateful moment of the entire show, a discussion between the surviving Starks that may have a dramatic effect on how this story ends. Because now Arya and Sansa know the truth of Jon’s parentage, and the events that fact sets in motion likely cannot be stopped.

As Arya rides off with The Hound to finish their respective lists, Sansa does the only thing one would expect Sansa to do with the information she has been given. She starts to weaponize it. Ignoring Jon’s plea to tell no one, she immediately tells Tyrion, who in turn tells Varys, setting up a schism as Varys sees Jon as an opportunity to break the cycle of pain and violence that plagues the Seven Kingdoms, and Dany as the brutal status quo. With the two advisors now at odds as to who should sit upon the throne, we appear to have the set up for a good deal of drama for the great battle to come.

Oh, did I forget to mention the battle? Dany doesn’t waste a moment in preparing to take the war to Cersei and secure her throne, but this being Game of Thrones there’s a twist. While Jon takes Dany’s main forces down the King’s Road to King’s Landing, she sails a portion of them to Dragonstone, flying along with her two remaining dragons. Well, scratch that, one remaining dragon, because just as they are arriving, good ol Rhaegal gets shot out of the sky by the latest iteration of Qyburn’s big crossbow. Euron and his fleet have once again magically managed to arrive at a place at the exact same time as the good guys, and the result is that part of Dany’s fleet sinks and Missandei captured.

The final confrontation is at the gates of King’s Landing. After a final hopeless attempt by Tyrion to spare innocent lives, he, Dany, and Grey Worm are forced to witness Missandei’s execution. In retrospect, this leaves us in an incredibly obvious place. The inferno that has reared its head again and again in Dany is now stoked to a white hot rage, and it feels like her journey to Mad Queen is now complete. It feels like Dany intends to burn the city to the ground in the name of her revenge and her (again, totally non-existent) birthright. Will anyone be able to stop her before all that’s left of the kingdom is ashes? It’s hard to say, but the look on her face should scare anyone that was expecting her to get a happy ending.

So there we are. The board is set, the pieces are in place, and we’re geared up for one last big battle episode. Luckily, it appears this one will be during the day so we can actually see something. The specifics of how it will play out are a mystery, and it still feels like there are a few more twists left in store, but we are finally reaching the end. There’s two episodes left and who knows what is going to happen next.