Unholy house in an unholy land. 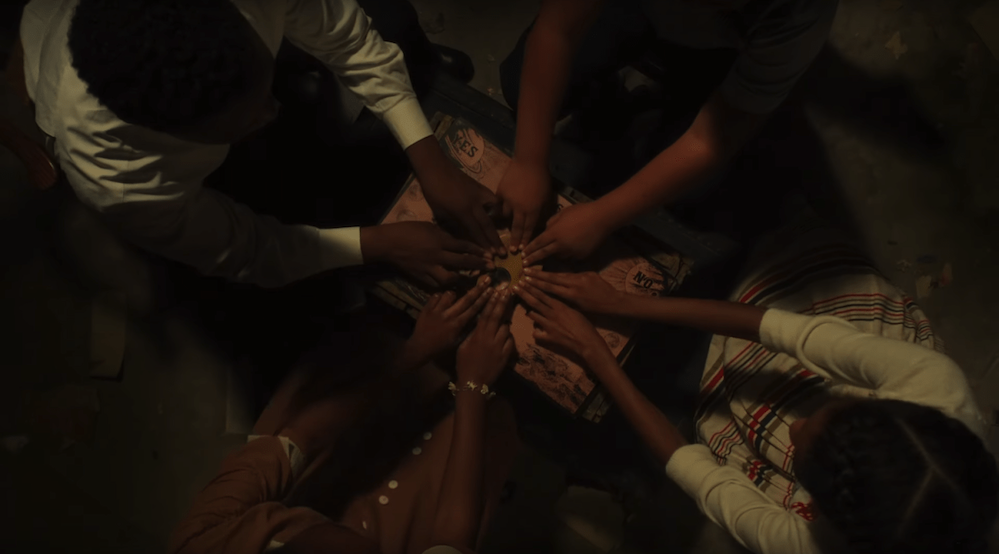 Lovecraft Country’s third episode opens with George’s widow, Hippolyta, and her daughter, Diana “Dee” Freeman, still reeling in the wake of George’s passing and funeral which, dialogue tells us, is now three weeks in the past. Diana seems to be doing the better of the pair as Hippolyta questions the “official” version of the story that Montrose, Tic, and  Leti cooked up, tearing out pages of George’s favorite paperback of Dracula as she does so.

Meanwhile, Leti treats her sister, Ruby, to a new home—new as in new to them as the house is actually a creepy Psycho-esque Victorian monstrosity in the North Side. Chicago’s sundown territory, essentially. The place is gigantic. It has thirteen rooms, not including the basement, has an elevator, and can house not only them but any other struggling Black people that they know. Ruby ignores the inch-thick dust, black-widow spider cobwebs, boarded windows, and murderous elevator so long as she gets the biggest room. Soon the house is hopping on move-in day when three horns blaring endlessly are heard. Angry white people have turned up again, three of them parking their cars in front of the property and tying bricks to their horns to show their displeasure.

Tic—having come over after confronting Montrose about the story they made up to cover George’s demise—decides he’s going to stay around for a bit keep an eye on the situation. While Leti parties around the house and the guests throw a raucous get-together, Hippolyta and Dee stop by to say hi. Hippolyta wanders the home coming across a room with a strange orrery while Dee joins some other kids to play with a Ouija board in best horror-movie fashion. The message the board spells out when they ask who they’re talking to—GEORGE IS DEAD—is cruel and sends her fleeing. Tic, meanwhile, spots Leti dirty dancing with another man, confronts her in the powder room, and they make love.. She apologizes for starting her period, but the smart money is on her having been a virgin, a fact she later confirms. When they emerge again it’s just in time for Leti to see that the three racist Klanheads from earlier have returned only this time they’ve set up a flaming cross in the yard. Having had enough Leti grabs a baseball bat like the Jackie Robinson of Tic’s dream in the first episode and takes it to their cars, shutting off the horns once and for all. For this they all receive a trip in the paddy wagon.

During her drive Leti is viciously thrown around the back of the car as the driver takes jerking stops, starts, and whipping turns, and she’s questioned by the officer with her. Holding onto leather handles while she bounces around, he asks her who encouraged her to buy the Winthrop house, and if she knew about the eight Black people that went missing within its walls. This is news to Leti, who got the money in a mysterious settlement payout from her dead mother (or so she thinks). After a series of pictures she took give off a spectral light that, when combined, turn into a giant angry face telling her to get out, she starts looking into things. As she explains to Tic, the house belonged to a Winthrop family for generations but was purchased not long before she got it by a doctor who worked for the University of Chicago. That is, he did before getting expelled for unethical experiments—or as Leti bluntly calls it, human experiments.

Turns out the doctor was friends with the nasty old police officer who looked the other way, as the doctor conducted his Madame LaLaurie-style vivisections, mirroring the Tuskegee Experiment that was happening during this period. As a result the house is full of the angry dead, and Leti gets Tic and a voodoo queen to help cleanse the house. The woman slits the throat of a goat over a bowl and begins baptizing everything with it before moving on inside. Eventually the group end up in the basement where they begin a chant to drive out the spirit of Dr. Mengele, Jr. or whatever he’s called and his spirit first possesses the mambo before inhabiting Tic. Leti calls on the spirits of his victims to drive him out and, as they join in a circle and begin to chant themselves, their ghostly forms are restored and the doctor’s cruelties are erased as his spirit is driven out once and for all.

While all this is happening, the house gets broken into by the three honkie honkers from earlier, going to exact their revenge in a physical way. They underestimate the house, however, and don’t realize that the Black inhabitants weren’t the worse thing they thought they’d face. Two end up the victim of steam exploding from a radiator and the third gets decapitated by that murderous elevator. A little while later Leti has the house cleaned up again and once more inhabited by struggling families. As she leads a local Black reporter on a tour they get off the elevator which goes down and down and down, past the basement, down to the room beneath the basement. There we see the bodies of our three intruders and the bones of the victims of the mad doctor, on and on stretching down a tunnel with no seeming end.

Tic sees a familiar silver touring car in town, pulling up to the real estate offices of the same man who sold Leti the haunted house. He goes in to find Christina Braithwaite there and realizes it was she who passed off the money to Leti as her mother’s inheritance. She explains why, even as Tic pulls a gun on her and she freezes him in place. Her father’s spell was one of invulnerability, one he equated with eternal life, that he had to drop when beginning the ritual to get back to the Garden of Eden. When it went awry he perished. What she wants is the pages of the speech of Adam that Winthrop possessed and took when he left her father’s Order all those years ago. Being that the family wants the language for its magickal properties—thinking that Adam’s naming of God’s animals was his method of putting things in their place—it’s a great coup for a bunch of white supremacists seeking a magickal way to put Black people down permanently. But she wants the power. If her father could wrangle the kind of spells he could with only half the pages, then getting Winthrop’s will be nuclear.

“Holy Ghost” is a better return to form of the first episode’s pacing and pathos, even as it doesn’t feel as of the moment as the first two, even with its premise about racial housing segregation in the heart of Chicago. Whatever the feelings about the immediacy, it still carries a strong message and an even stronger performance from Jurnee Smollett, whose Leticia Lewis is going to go down as one of the great performances of the horror genre or any other. Possibly the strangest thing about the episode is in the show’s decision of what to be subtle about and what to make overt. In the novel the Winthrop house has a giant fountain of Hecate in the atrium, a clear sign of nogoodnik former owners, and something that’s totally absent from the show. What’s in the show is mangled bodies, baby-headed monsters, and giant faces springing out of piles of photographs—strange, but not always in ways that seem beneficial to what’s being told.

The episode features a day-by-day time stamp. The time stamp in a haunted house story is a technique this author first traces to the Richard Matheson classic, Hell House (and its subsequent adaptation, The Legend of Hell House)