How Do You Keep Fighting? 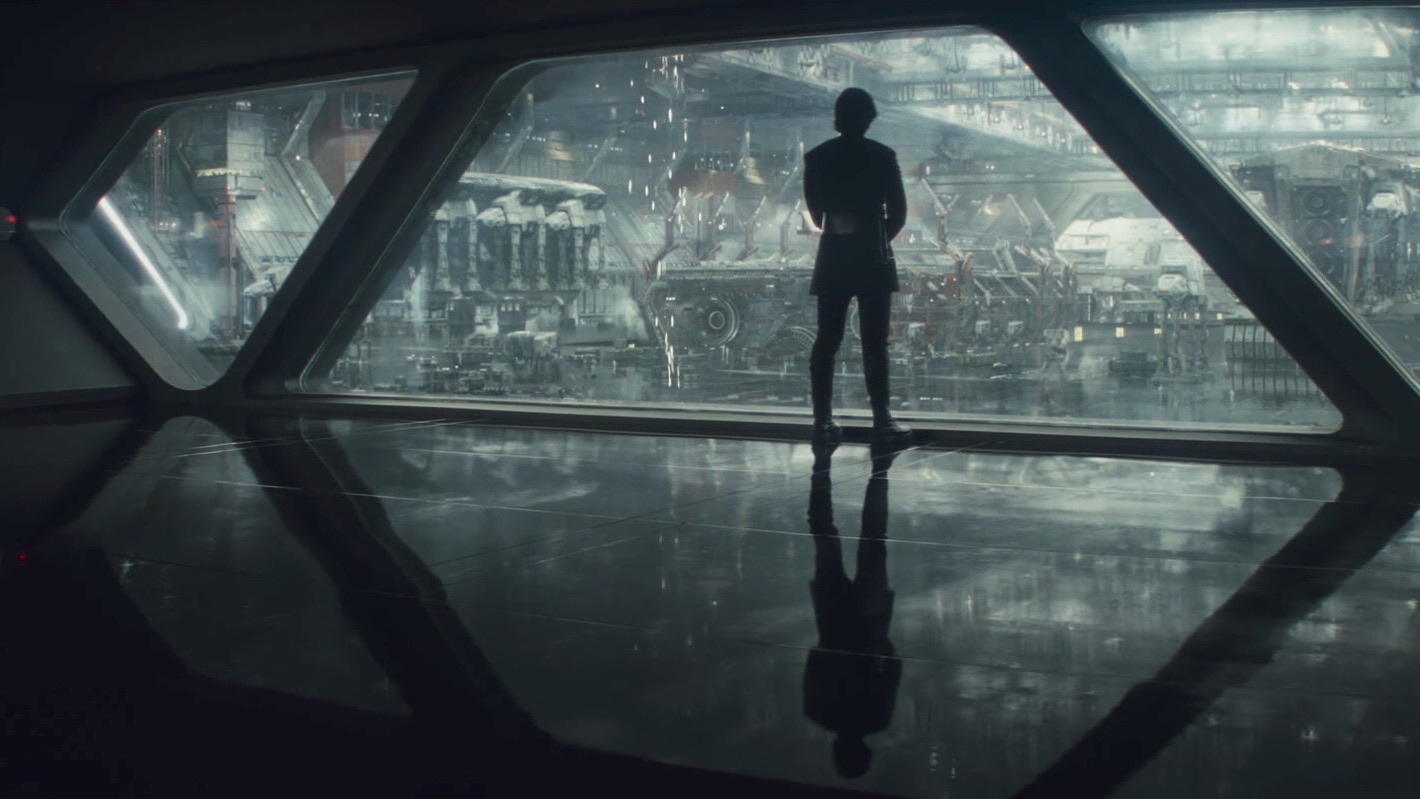 This post contains spoilers for Star Wars: The Last Jedi.

Through nine films over the course of 40 years, every Star Wars movie has been introduced the same way. Blue letters over a black backdrop reading, “A long time ago in a galaxy far, far away….” Its twist on the 600-year-old fairy tale opener, “once upon a time,” appropriately sets the stage for the defining fantasy story of the last three generations, but there’s another phrase early in the original 1977 film that could just as easily stand in for the entire series:

“It is a period of civil war.”

The Star Wars saga is one that spans 66 years of fictional time but in every film, the galaxy is embroiled in, or on the brink of civil war. The Invasion of Naboo set the stage for the Clone Wars, which set the stage for the Galactic Civil War, which planted the seeds for the rise of the First Order and the destruction of the New Republic, and on and on it goes. The series, after all, is titled Star Wars, and it does right what it says on the tin. Time after time, despite their best efforts, the heroes of these stories fail, the structures that are established to prevent evil from rising crumble, and the war rages on. After nearly seven decades of enduring this never ending cycle, what is left but to look on and realize that the systems that govern your reality are so deeply, fundamentally broken that they can never truly be repaired? Evil will always find a foothold, heroes will eventually fail, and no matter how long you keep fighting, the war will never end. How do you respond when faced with this kind of existential horror?

This is the question Star Wars: The Last Jedi is preoccupied with, and throughout the course of the movie its characters present a number of different answers. First option: maybe just run away and wait for it all to be over. That’s the direction Luke Skywalker takes, and it’s one that hasn’t sat well with a lot of fans. Luke Skywalker, last Jedi, hero of the Galactic Civil War, heir to the Chosen One, and instrumental figure in bringing balance to the Force simply runs away and waits to die. How could that be? How does that gel with the character we thought we’ve known for 40 years? Well, what do we know about Luke? He’s reckless, impulsive, always dwelling on people and places far away from where he is. We know that the moment that almost turned him to the dark side was when Vader threatened his sister, and the only thing that brought him back was his fear of failing the same way his father did. Of course Luke would fear failing the same way his other father figures did as well, being blind to the rising influence of the dark side and allowing a figure like Vader to emerge. So he overcorrects. Instead of ignoring his nephew’s darkness, he briefly intends to snuff it out once and for all, falling victim to the same fear that nearly led him to strike down Vader. It’s in this moment of weakness that he created the very thing he feared.

Kylo Ren was born out of Luke’s failure, just like Vader was born out of the Jedi’s, and so Luke removed himself from the equation. Perhaps he chose Ahch-To hoping to find answers, to find wisdom in the ancient Jedi texts that could help him undo the damage he’d done, but as Luke tells Rey, the history of the Jedi is one of failure. Trying over and over again to fight back the darkness, only to allow it to resurface as a consequence of their hubris. There were no answers on Ahch-To, only dusty old books filled with the failures of the past. So there he stayed, resigned to die and so allow a thousand generations of failure to die with him.

But these failures don’t die with him; they are alive in Kylo Ren. For a series that’s sort of all about daddy issues, poor Ben Solo probably has it worst of all. By the time The Last Jedi rolls around, he’s already been let down by three separate father figures. His father shipped him off to live with an uncle who almost tried to kill him, meanwhile his new mentor Snoke is less interested in Ben’s potential than in the legacy of his bloodline. For all of Ben’s obsession with his grandfather, he finally gets to understand what it means to be Anakin Skywalker, manipulated by people with their own agendas because you’re preordained for greatness based on the nature of your birth. Just like Anakin, just like Luke, the Skywalker blood that runs through Ben Solo’s veins makes him little more than a piece in some cosmic game of chess, pushed and pulled based on what others think he should be rather than what he wants for himself. So how does he respond? By burning the whole thing to the ground.

“Let the past die. Kill it, if you have to.” This is Kylo’s new philosophy, one that’s radically different from his previous obsession with his legacy, but one that makes sense once he recognizes the vicious cycle he’s been trapped in since birth. He’s killed his actual father, he kills his most recent surrogate father, and he intends to kill his former surrogate father. There will be no one left to decide his fate except him, not under the thumb of a supreme leader or an emperor or a Jedi Order, but a ruler unto himself, earned by the very birthright so many others had tried to exploit, free to burn down the whole broken galaxy in the fires of nihilistic rage.

From a certain point of view, that philosophy almost makes sense. Maybe not the part where you anoint yourself supreme leader of the galaxy, but the idea of tearing down the entire broken institution doesn’t seem like a bad idea on its face. Especially not after we take a trip to Canto Bight and see the way the richest members of galactic society make their fortunes by pouring fuel on the fire of an endless war. It’s here where we really get to see the extent of the damage, how deep this galactic sickness really runs. These people don’t discriminate between good and evil, money is money, regardless of who it’s coming from. While the war rages light years away, arms dealers and war profiteers piss away their excess credits in the casinos as slave children cower in the shadows to facilitate the pleasures of the wealthy.

The war never ends because it’s paid for by those who stand to profit from it. Knowing that, it’s easy to say the whole thing is a con – both sides are just as bad – so why not stay out of it and just do what’s in your own best interest? “Live free. Don’t join,” is the myopic wisdom offered up by the opportunistic slicer, DJ, but when you boil down Luke’s fear and Ben’s anger, the result is ultimately the same. Luke’s running away from the fight and Ben is setting fire to the board, but both are an attempt to abdicate their responsibility, to hide from their guilt and the accountability that comes along with it. If Luke just goes off and dies, he never has to face the product of his failure. If Ben kills everyone he’s betrayed, there will be no one left to gnaw at his guilt, and as a result the galaxy continues to suffer. All the anger and fear are ultimately no different than apathy.

Instead, the final solution – the correct solution – is found in the character of Rose. Rose has just as much reason to be angry about the war as anyone. Her sister gave her life fighting in a war without end, in an attack that did little to cripple the enemy, but took a sizable toll on the Resistance. While Finn is initially smitten with the glitz and glitter of Canto Bight, she sees right through to its ugly core. But she doesn’t give into cynicism or nihilism or fear. Instead, at every opportunity she does what she can to make things just a little bit better. Whether that’s freeing the captive fathiers on Canto Bight, saving Finn from throwing away his life in a pointless display of bravado, or giving a small symbol of hope to a stable slave who dreams of a brighter future. “That’s how we’re going to win. Not by fighting what we hate, but by saving what we love.”

The truth is that none of us by ourselves can fix what is broken, and what’s broken may never be fully fixed, but that doesn’t mean we’re allowed to just give up. We do our best to make things just a little bit better than they were before, knowing that we’ll inevitably fail, but trusting that those who follow us will carry the torch just a little bit further. As Yoda shares with Luke, two Jedi who have known catastrophic failure, “we are what they grow beyond.”

Even in our darkest hour, when hope seems lost and no one is prepared to come to our aid, we still fight to save what we love. We have to recognize that symbols of hope still have power even if the people behind them are fallible. The Jedi themselves were failures – over and over and over again, from Luke to Yoda and beyond – but despite their failures, they still inspired hope. They still moved people to be better than they were, to hold on just a little bit longer. It’s the subtext of Yoda’s famous assertion that “there is no try.” We can’t be afraid to fail because failure is an essential part of the process. From failure we learn how to do it better, and we show those who follow us which pitfalls to avoid.

It is a period of civil war. It’s always been a period of civil war, but that doesn’t mean there hasn’t been progress. We’ll always be fighting these battles, but that doesn’t mean they’re not worth fighting, that it’s not worth defending those that we love. We may not live to see success, but success can only be achieved if we believe it’s possible. As long as there’s someone left to look up into the stars and dream of a better future, hope is not lost. It’s up to us to help them get there.

When not haunting repertory theaters and insisting that 35mm is somehow 'better,' David spends his time arguing that the FAST & FURIOUS films are the greatest artistic achievement of the modern era.