STAR WARS at 40: The Power of Myth 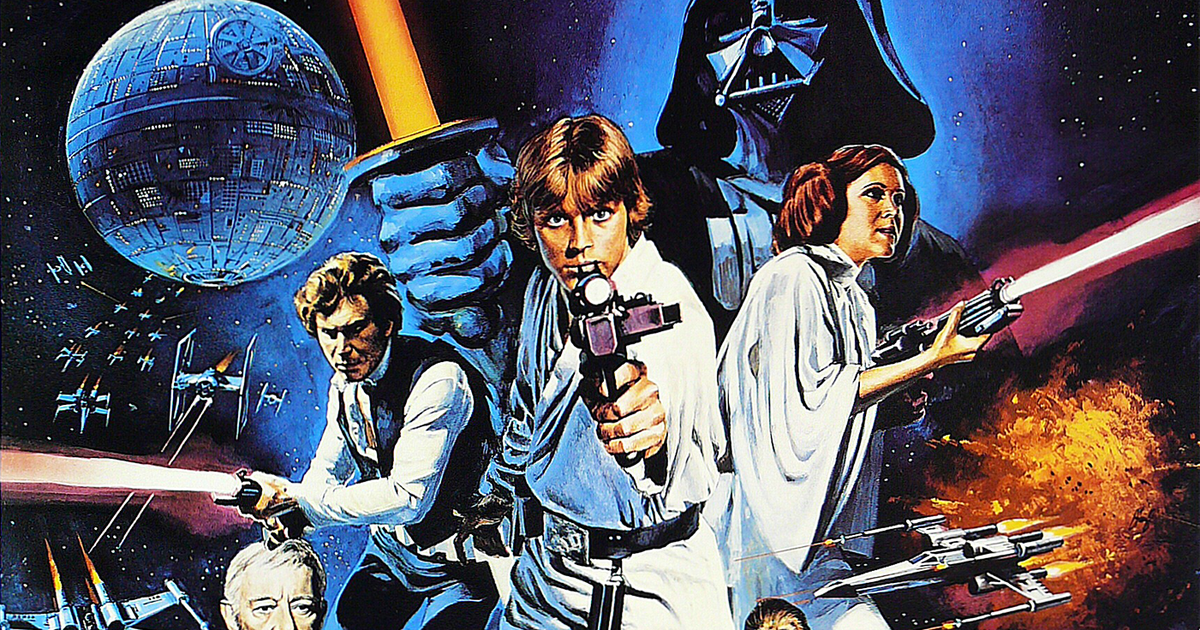 This year marks the fortieth anniversary of Star Wars. For four decades, George Lucas’ space opera has dominated our collective cultural consciousness in a totally unique way. There are many cultural juggernauts, but few have ever exhibited the kind of staying power and unrelenting potency of Star Wars. The Beatles are a cornerstone of our pop culture, sure, but Beatlemania, its cultural fever pitch, died long ago. Star Trek has been with us for decades, yes, but has always been more of a niche obsession. It’s never commanded the kind of widespread love and admiration that Star Wars does. Harry Potter burned bright for about a decade and a half, but it now seems in danger of fizzling out. So what makes Star Wars so different? How does Star Wars remain ever-present in pop culture without ever losing that indefinable “thing” that makes it feel so special to so many?

The answer is myth. Star Wars is not just a rousing space swashbuckler or sci-fi shoot-em-up. Decades of books, TV shows, video games, card games, role-playing games, and other marginalia may have obscured this fact but, at its core, Star Wars is a myth — a very old story dressed up in very new clothes. It is not revolutionary, but evolutionary. It is not a single point, but part of a continuum. Star Wars feels timeless and evergreen because it is–it’s just the latest version of a story that we’ve been telling ourselves since before we could even write it down (albeit with a few clever innovations). It’s the power of myth that makes Star Wars, Star Wars.

But it almost didn’t happen this way.  When George Lucas first sat down to write Star Wars in 1973, he had something else in mind. Originally, Lucas planned to use his post-American Graffiti clout to buy the rights to Flash Gordon. He wanted to see what would happen if the crude adventure serials he loved as a child were “done really well,” that is, made with mainstream Hollywood production values. When Lucas was denied the rights to Flash Gordon, however–a world historical blunder for the Flash Gordon rights-holders, but a world historical gift for everyone else–he set out to write his own version of it. In search of inspiration, Lucas initially looked to the the history of the strange sub-genre that Flash Gordon inhabited, what we now call “space opera.” The creator of Flash Gordon, cartoonist Alex Raymond, pointed Lucas in the direction of Edgar Rice Burroughs and his Barsoom books (A Princess of Mars, John Carter of Mars, etc.). From there, Lucas discovered Edwin Arnold’s 1905 book Gulliver on Mars, the first fully formed space opera. But the thread frayed after that, and Lucas found that early sci-fi pioneers like Jules Verne had some of the ideas that captured his imagination–like futuristic technology–but lacked others, like the unsophisticated and simplistic sense of adventure that he responded to so strongly when he was young.

With only a handful of predecessors to look to, Lucas set about the messy writing process with no distinct plan, unsure of exactly what kind of framework he would attach his fantastical ideas to. He’d later characterize it as “a good idea in search of a story.” And that search was a slog. Lucas was not a natural writer and he hated the process. He looked for ideas to steal, shortcuts to make the chore easier. He read every book on storytelling that he could get his hands on. He screened his favorite movies constantly, looking for tips and clues for how to make his very complex ideas comprehensible. It wasn’t working. Months later, people were still looking at him like he was crazy, or telling him that they simply didn’t get what he was talking about. This drove Lucas further and further away from the empty swashbuckling of Flash Gordon and Edgar Rice Burroughs, and closer and closer to something more basic and elemental. At some point, Lucas stumbled upon Joseph Campbell’s The Hero with a Thousand Faces. Campbell, an academic specializing in comparative mythology, had surveyed practically the entire history of human popular storytelling and distilled from it a single analytical framework–the so-called monomyth–to help explain how and why certain stories had endured across cultures and across time. Campbell summarized the monomyth as follows: “A hero ventures forth from the world of common day into a region of supernatural wonder: fabulous forces are there encountered and a decisive victory is won: the hero comes back from this mysterious adventure with the power to bestow boons on his fellow man.” This was perfect for Lucas’ purposes–it was simple, easily digested, and timeless. It explicitly made room for the weird and wild, giving it a coherence by contrasting it against the mundane. Once Lucas began to incorporate Campbell’s ideas, Star Wars sprang to life.

But what Lucas had stumbled upon wasn’t just a handy storytelling shortcut. Myths are more than mere stories–they are a powerful tool of mass communication designed, over millennia, to reflect and influence people and society in profound ways. Campbell and other academics have described myths as being foundational expressions of the societies that they come from. They inform and reinforce how a society thinks about itself and the world around it. Creation myths like The Epic of Gilgamesh or The Book of Genesis served a cosmological function, giving people explanations for the natural world around them. Myths like King Arthur and the Knights of the Round Table served a sociological function, defining and promoting an ethno-national identity and social order. Myths like The Odyssey and Orpheus and Eurdydice served a metaphysical function, instilling a sense of awe and humility before the boundlessness of creation, and the ultimate mystery of death. Mythic heroes like Hercules, Beowulf, and Oedipus served a pedagogical function, representing each society’s opinions on virtues and vices, and the way that fortune, fate, or the divine intervention might ennoble or destroy the virtuous and vicious alike. A people’s mythology could tell you virtually everything you need to know about them–their social norms, politics, religious beliefs, philosophy, military, and maybe even economy.

By some divine providence, Lucas happened to be writing a myth at the exact moment that the world needed one. The space age had come, and humanity had at long last walked among the stars, looking down upon itself from the heavens from the vantage point of the gods, themselves. This new perspective, and the increasing normalization of global travel and communication, gave humanity a new sense of itself, one that transcended national borders and old ethnic and religious dividing lines. The old myths no longer reflected their respective peoples and society. But with this radically new self-conception came a kind of disorientation. Aided by great disappointments like Vietnam and Watergate, cynicism had also set in. What was good? What was evil? Did those terms even have relevance anymore? Look at the cinema of the 1970s, the environment in which Lucas was writing, and what you’ll see is an overwhelming sense of uncertainty or even despair. It’s a reflection of a society that isn’t what it was, but also hasn’t yet figured out what it will become, or whether what it will become has any value.

With Star Wars, Lucas, consciously or unconsciously, found the perfect solution for bringing mythology to this confused, global, contemporary audience. Perhaps, in his frantic research, Lucas came across the concept of Märchen, a German expression that folklorists use to describe a certain subgenre storytelling.  (Or maybe he just understood it instinctively.)  Märchen are fairy tales, stories similar to myth and legend, but which lack ethnic or geographical specificity, and which make no claim to historical truth. Rather, Märchen take place “once upon a time,” in an undefined place and in an indeterminate past. They feature characters who forsake the complexities of real people in favor of flat archetypes, who encounter magic, monsters, and the supernatural in the course of adventures that impart moral truth. Lucas, writing in his time of trans-nationalism and uncertainty, simply replaced the limiting hyper-specificity and local morality of mythology with the generality and moral universality of Märchen.  He fused the two together, creating a new mythological framework that transcended the monomyth, deriving not from any one people or place, but from all people and all places.

This new vessel of Lucas’ became a melting pot of every influence he’d ever acquired from a lifetime lived in this new and burgeoning global culture–it contained John Ford, Akira Kurosawa, and Fritz Lang; King Arthur, Jesus, and Buddha; knights and samurai; robots and farmers; swords and spaceships; African deserts, Guatemalan temples, and the vastness of outer space. Virtually anyone from anywhere could see themselves and their culture reflected in it. In short, Star Wars created a mythology that speaks of, and for, a space-faring, global culture.

Star Wars endures, then, because it is perhaps the last, best, and fullest expression of popular human storytelling–the final refinement of a shared project to define ourselves that dates back millennia, to a time even before human memory. By putting Gilgamesh and King Arthur among the stars, and shedding from them their petty and worldly burdens, George Lucas showed us everywhere we’ve been, and everywhere we might go, all at once. He gave humanity a vision of our farthest future rooted in our most distant past–cutting through the cynicism and uncertainty of modernity with simple, timeless truths. Star Wars was not just lightning in a bottle or a mere quirk of time and place. It is that too, yes, but also more. It is an endlessly adaptable mythos, one that can grow and change as humanity does, incorporating as many new dimensions of human self-conception as we can think of.  We only have to want it to.

Joseph Campbell, whose academic work gave Star Wars the mythic backbone it needed, was ironically late to the party. He didn’t see the original Star Wars trilogy until it was completed, sometime in the mid-1980s, long after it had already taken over the world. After building a personal friendship with Campbell, Lucas offered to screen the films for him at Skywalker Ranch, one per day. Campbell declined–he wanted to see them all in one sitting. It was perhaps the first time this had ever been done, but Lucas obliged. Campbell, the preeminent authority on myth, the one man in the whole world who should have been able to see through Lucas’ transparent re-purposing of old mythological tropes, was nevertheless captivated. He was reported to have said: “You know, I thought real art had stopped with Picasso, Joyce, and Mann. Now I know it hasn’t.”  It’s hard to imagine higher praise from a higher authority.

If we want it to be, Star Wars can be for all time.  It’s not a mirror for just this time and place.  It’s not anymore bound by the politics and concerns of 2017 as it was of 1977  Already, we’ve seen it change and grow in ways we might not have imagined forty years ago–bringing us a steady stream of new heroes, new stories, and new visions of a life among the stars.

So here’s to another forty years of change.  May the Force be with us, always.