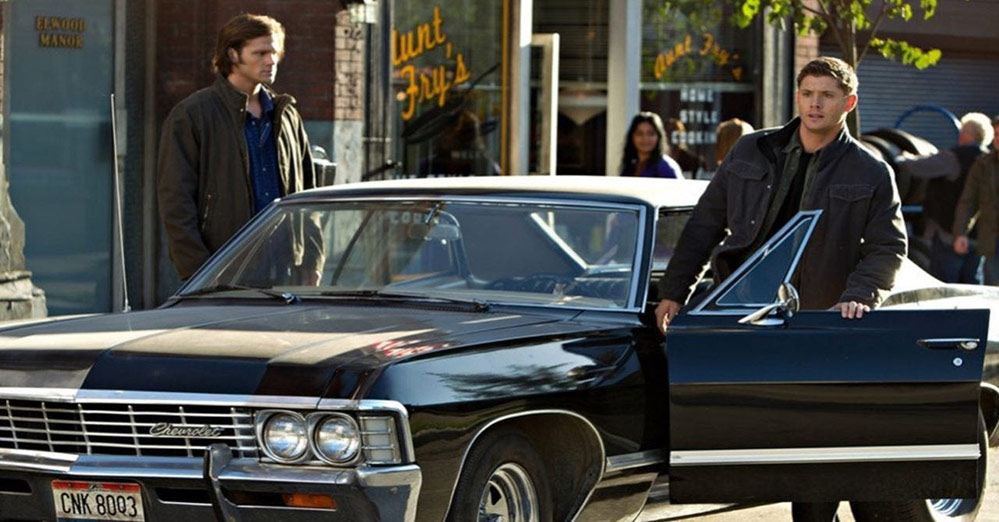 The world is literally toxic right now. It’s rough out there, even if you’re not literally going “out there” for fear of catching a nasty bug, or being stabbed because someone thinks you’ve caught it already. Seriously. A friend of mine coughed on the subway and someone flashed a blade at him. The effects of COVID-19’s spread have been wide ranging, from the obviously tragic to the morbidly humorous1 to a low key trauma for most of the Lewton Bus crew.2 Meanwhile, our Fearless Leader is dropping the ball on the whole thing in spectacular fashion. So. We need some nice news, right? Not earth shattering. Certainly not something that makes up for this whole debacle. But something nice. Something charming. Just a palate cleanser.

C’mon, Jensen, don’t be so cynical!

Well I got that for you. You’re welcome.

The superhero team-up show Legends of Tomorrow and the long running horror/fantasy/hunky show Supernatural are crossing over. Kinda. “Baby,” the iconic ’67 Impala from Supernatural that has accompanied the Winchester boys through all of their various deaths and resurrections, will be making an appearance in an upcoming episode of Legends of Tomorrow. Neat!

Entertainment Weekly talked to Legends showrunner Phil Klemmer about it. I’ll let them take the wheel:

Baby’s guest spot has to do with the episode’s plot, which involves Constantine, Charlie, and Sara traveling to British Columbia — where both shows film — in search of season 5’s MacGuffin, the Loom of Fate.

“From the beginning, we knew that we wanted to set an episode in modern-day Vancouver, because directly following the crossover that was all we could afford… I’m kidding, sorta, not really. Anyway, we wanted to do a spooky, Predator-style skulk-around-the-woods episode and at the 11th hour decided to have the Legends intersect with the crew of Supernatural. This was the inspired choice of our producing director Kevin Mock, I believe,” Klemmer said. “In our world Supernatural is a TV show, not a real thing. Sorry, Supernatural fans.”

Please, please don’t apologize, Mr. Klemmer! As a big fan of Supernatural, I have to say that it actually sharing a universe with the CW/DC shows doesn’t make a whole lot of sense, logically or otherwise. But it being a show in said shared universe? That’s totally in line with the show’s often very meta sense of humor. I mean, there’s an episode where Sam and Dean3 attend a Supernatural fan convention and are praised for their supposed cosplay.

No! Really! That happened! And that’s just one example!

Meanwhile, while I’m not very familiar with Legends of Tomorrow, from what I’ve heard this fits the show’s gleefully bonkers tone. I understand there’s an episode where the superheroes have to save a young Barack Obama from a giant psychic gorilla, and that alone makes me want to dip my toes into the show.

Maybe I’m just craving some good news—any good news—but this makes me very, very happy. We need this kinda thing. It’s fun. Also, apparently the version of “Baby” used in this episode is not the one actually used in Supernatural. It was a fan recreation, which is pretty adorable.