The Path of the Warrior is Long and Arduous 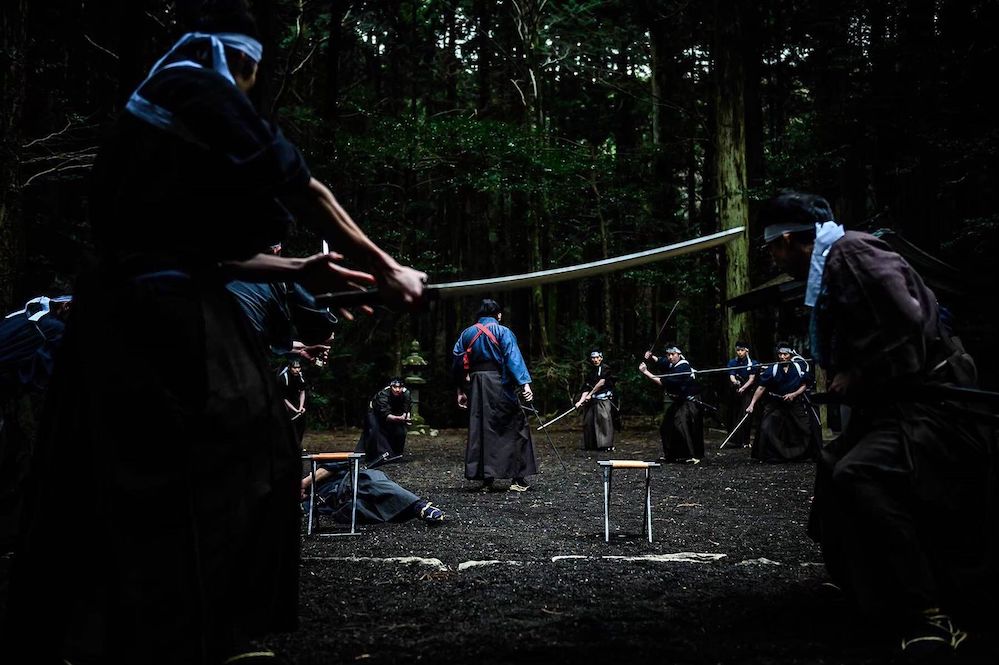 The one-shot take or “oner” device, a film scene captured in one continuous movement by a single camera (or edited to give the illusion of such) has been around for many years. The technique has gained attention in recent years, with smaller independent projects and major studio high-profile features alike using it as a key selling point. Judging how successful they are is not as easy to pin down as it seems. For some, the more obvious a one-shot is, the less effective the result. For others, picking up on the cheats, tricks, and editing techniques that create the oner illusion can be part of the fun. Just as well, capturing a uniquely talented actor performing incredible feats can be justification for the one take alone, regardless of how it is crafted. In Crazy Samurai Musashi, Japanese martial arts star Tak Sakaguchi engages in one of the most extreme examples of the device to date: a feature length extended action sequence filmed in one uncut take that shows a single protagonist facing off against four hundred enemies. The result: a fascinating experiment in film making, but a failure as an engaging narrative. Still, there is a lot to be gleaned from this unique venture.

Tak stars as the legendary Ronin Miyamoto Musashi, a world-renowned historical figure who gained prominence during the feudal era of Japan for his philosophy on combat and unrivaled skill with a sword, remaining undefeated in his many fabled duels. Crazy Samura Musashi is a dramatization of one such encounter, in which Musashi fought against many members of the Yoshioka school of swordsmanship who sought revenge on him for his previous victories against their clan leaders. It’s worth pointing out here that Musashi’s success as a warrior could be attributed to cunning, deception, and downright fighting dirty as much as it was to his raw skill as a swordsman, something he never shies away from in his famous philosophical text The Book of Five Rings. Suffice to say, after a brief opening sequence punctuated by a shocking murder, I was fully on board with seeing what kinds of tricks Tak and his team of stuntmen and choreographers had up their sleeves.

Unfortunately, the answer is not much at all, at least Insofar as martial arts moves and dynamic sequences are concerned. Crazy Samurai Musashi is deathly lacking in any sort of flashy stylized fighting that has been the signature of most of Tak’s work. Most of the movie is Tak recycling the same set of moves against the same formations of enemies. To be fair, there is something to be said for a sense of physical efficiency and contextual consistency; one of Musashi’s fighting philosophies talks about not wasting energy on flourishes and flashy techniques, and in this case it is more practically a way for Tak to conserve his energy. However, as the reality of combat compared to the illusion of cinema has always been, applying this principal to an action movie is downright boring to watch. That boredom grows into outright exhaustion over the 77-minute unbroken sequence, matching the exhaustion of the star performer doing his damndest to keep the tension up with each swing of the blade, with barely any dialogue to hold it together.

If all that is the case, then where does the fascinating part of this experiment come into play? I was surprised to discover that rather than being linked together by different action set pieces to keep things moving along, Crazy Samurai Musashi works best during several more traditional dramatic moments that are peppered throughout the long battle. These moments work simultaneously to try and re-engage the viewer, but also to literally allow Tak to take a break. Let’s make one thing clear, Tak is a real-life world class physical performer and he absolutely works his ass off in this film, truly moving within in an unbroken edit. However, certain moments allow him to either pause in place or let the camera (still uncut) be taken off him, giving him a moment to rest. Some of these moments take the form of named swordsmen emerging from the crowd of faceless goons, declaring their intent to challenge Musashi one-on-one, not unlike a videogame mini-boss. Sadly, these face offs usually last only a few seconds, especially since as I mentioned, Tak must conserve his energy at all costs.

The set design itself becomes hugely important to the narrative and the flow of the one-take. As fight choreography is often likened to dancing, Crazy Samurai Musashi has more in line with a live stage play or musical than with our typical perception of an action film. Traversing through different buildings within the Yoshioka compound keeps the setting from getting stale. At the same time, Tak uses these moments to allow Musashi to take cover and momentarily hide from his assailants, while also taking a moment for the character to sardonically reflect on the situation at hand. Moreover, at each “checkpoint”, there are caches of water and weaponry, allowing him to continue the fight. I laughed at this contrivance at first, but once again these moments prove both practical to the real performers and consistent within the context of history. It is said that Musashi arrived several hours before the scheduled duel to covertly prepare and get the jump on his opponent, so it stands to reason that the real Musashi would have put some measures in place, knowing that he would be outnumbered in enemy territory.

There are moments of genuine brilliance in Crazy Samurai Musashi where the conceit of the one-take, the skill of the performer, the accuracy of the stunt team, and the artistry of the cinematography and direction all work to the films benefit. At one point, the waning dusk sunlight that glints into the camera acknowledges how long the fearsome battle has been going on while also representing a moment of clarity in the middle of a furious clash; that strange sense of “oneness” that can sometimes occur in a fight when your focus and adrenaline peak. It’s a small moment that feels like a cinematic representation of a Haiku.

The problem is, It takes a grueling slog of monotony to get to these brief moments.

As such, Crazy Samurai Musashi is altogether not very enjoyable, neither as a straightforward narrative nor as a blitz of action cinema. Still, there is a lot to take away from it in the sense of cinematic theory, practice, and philosophy. In a way, it is in line with Miyamoto Musashi’s actual teachings, where he would often demand that the reader “thoroughly investigate” his concepts by putting them into action. Just as a masters like Roger Deakins or James Cameron push the boundaries of film techniques in their projects, I very much appreciate this experiment by Tak Sakaguchi and his crew to push the conceit of the one-take to its limit. It is in the same spirit of any genuine martial artist that pushes themselves through arduous repetition to reach new levels. However, if you are looking for a more straightforward action movie experience that will supply the rush you crave, you may want to look elsewhere.

The Path of the Warrior is Long and Arduous