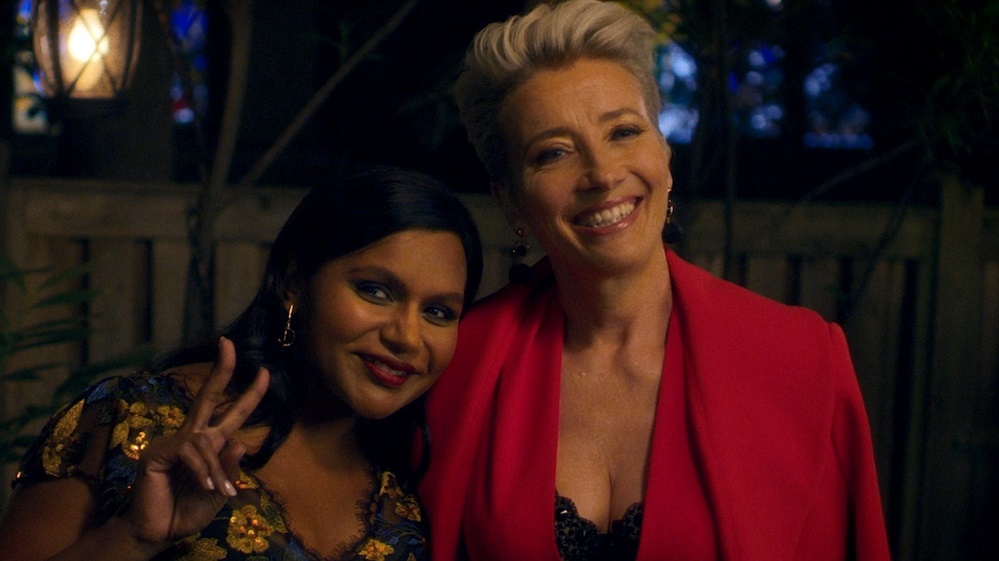 Traditional “Late Night” talk shows are very, very white. That’s not even an opinion or conjecture, that’s just basic fact. When the closest thing to diversity in the entire history of broadcast late night talk show hosts is the fact that Conan O’Brien is a redhead, it’s basically irrefutable.

Which is why it’s a perfect, and frankly deserving subject for a good lampooning. Taking the (mostly) Ivy League educated writers rooms and hosting comedians to task for their complete and utter disregard for anything outside of their narrow worldview is the epitome of punching up, and from a distance Late Night appears to do just that. But Mindy Kaling, who wrote and stars in the film, has a lot more on her mind than just taking the industry down a peg. She’s interested in what drives women of all ages, races, and classes and the myriad of ways that impacts their roles in the workplace.

Katherine Newbury (Emma Thompson) is the only woman late night talk show host on a major network and has done so for almost three decades. Her show has become stale, middling, and boring over the past decade, catering to the crowd that mostly only watches out of a form of brand loyalty or because they lost the remote and are stuck on her channel. She also has never had a woman writer last more than a few weeks on her staff, and when a former employee challenges her on this, she decides to hire basically the next woman to apply for a position. Enter Mindy Kaling’s Molly, a chemical plant supervisor who is a Newbury superfan but doesn’t have any experience in TV and whose comedy “career” involves hosting charity benefits and practicing chemistry-based material over the intercom at work. Molly’s hiring coincides with news from the network that Newbury will not be renewed as the host, leading to desperation on everyone’s end as they try to save the show.

Late Night’s best quality is its cast, obviously starting with Thompson and Kaling but is filled with an incredibly strong supporting performers that includes the likes of Oscar nominee Amy Ryan, Hannibal’s Hugh Dancy, Veep’s Reid Scott, The Sopranos’ Max Casella and living legend John Lithgow. The writing similarly is impressive, never settling to be merely a simple workplace comedy or satire of the industry. Instead, the film roots itself in its characters and Kaling’s screenplay manages to at least utilize the trappings of romantic and workplace comedies — think The Devil Wears Prada or Broadcast News — to actually tell a story as opposed to just using it as an excuse to attack the industry via strawman. Looking at you, Aaron Sorkin and Studio 60/The Newsroom.

There are elements of Late Night that don’t work nearly as well. For all of its cleverness, the broadness of a lot of the comedy and emotional beats is often jarring. Ike Barinholtz shows up to do a pretty spot on Dane Cook impression, but it completely falls flat because not a single person has thought about Dane Cook in a decade. Save one great “White Savior” remote segment a la “Jaywalking” bit, the actual comedy bits are fairly rote, even when the comedy is supposed to be “improving” on the show. Kaling’s adoration of romantic comedies can’t help but seep through the film’s pores at times, resulting in some overly-saccharine moments that feel completely at odds with some of the more earnest yet complicated depictions of the human condition. Compare Thompson and Lithgow’s moment of painful, but loving reconciliation with basically any of the other romantic subplots in the film and it’s like night and day. Some of this is because Thompson and Lithgow are quite literally among the best actors to ever grace the screen, but there’s a rawness to the pair’s relationship that is missing in the more cutesy romantic endeavors with Molly.

But really what matters, and why Late Night ultimately succeeds, is the relationship between Molly and Katherine and the way the film evolves them over time. Kaling’s screenplay does an incredible job of imbuing each character with a sense of purpose, creating complex, layered interactions between the two where the power dynamics are constantly shifting. Newbury is an amalgam of the real world late night hosts, mixing Leno’s middle-of-the-road qualities, latter day Letterman’s complacency, and O’Brien’s go-for-broke energy when her back is against the wall. As the film goes on she grows into a much richer character, struggling with depression (of which her early comedy focused on), the specter of failing as the only female talk show host, and with being married to a man slowly dying from Parkinsons. Her interactions with Molly hold a ton of weight, and Thompson in particular brings the “behind the scenes” aspects of Newbury to life with stunning gravitas.

The film’s biggest flaw, however, is that it feels a bit rushed, particularly when it comes to the film’s side characters. It makes one wonder if maybe would have worked better as a TV series than a film. In some ways it’s praise to Kaling and company for creating a workplace and characters that I wish I got to spend more time with. It’s just that, in the 100 minute runtime there just isn’t enough room for the wide cast to truly grow in a way that feels earned. The writers room of white dudes go from hating the “diversity hire” and snubbing their noses at Molly to considering her to be the most important voice in the room with varying degrees of success.There’s an Apatow-ish quality to the film where every single side character has to have an arc rather than just being a funny side character, which rarely works even in Apatow’s two-plus hour films, let alone in something that is trying to be a tighter narrative. Reid Scott in particular, as Tom, feels like it was given the short shrift, going from entitled son of a former writer who tells Molly to her face that she was just a diversity hire who wouldn’t make it a week in the job to a romantic interest in what feels like a drop of a hat.

Late Night is strong enough elsewhere to overcome these nagging flaws, though. It manages to tonally balance being both an uplifting workplace drama while also plumbing the depths of broken relationships, depression, and the collapse of a legacy. Kaling, Thompson, and veteran TV director Nisha Ganatra (The Mindy Project, Brooklyn 99, Dear White People) craft something great via the central narrative, and the film is far more interesting than a mere dunking on the industry that it appears to be on the surface. Katherine Newbury, at a glance, is an amalgam of late night hosts of past and present, but much like the film itself, there’s layers of depth that Thompson, the screenplay, and the direction slowly unearth. In a summer that has, by all reports1, been fairly underwhelming, Late Night is a clever, delightful film with enough surface pleasures and depth to satisfy any audience. It’s a perfect piece of small budget counter-programming to the summer’s waves of middling blockbusters.