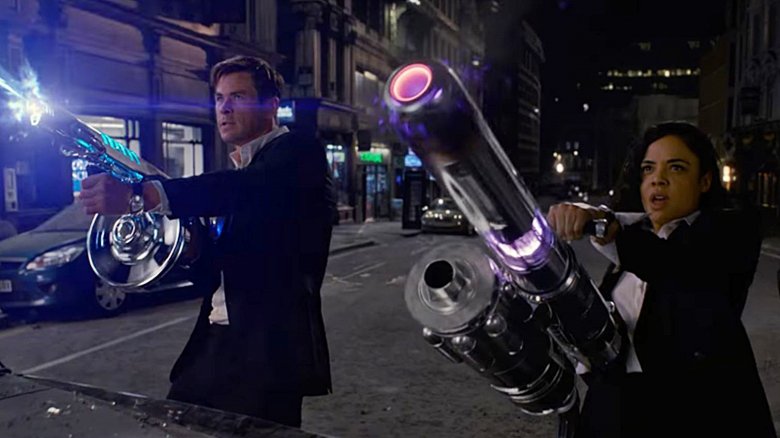 Men in Black International is one of those movies which was so nakedly born from a studio’s desire to use a dusty IP in a reboot gamble that you can point to how it was worked backwards from a desire to use the name over a functioning story or even pitch. It’s disparate and confused nature is almost lackadaisical in it’s banality, trying hard to ride on the shoulders of its cast, but undercutting them (not to mention the viewer) at every turn. It’s all too apparent that the story was constantly shifting and being rewritten during and after shooting, to the point where it’s impressive that a semi-coherent narrative was constructed out of the movie at all.

Set in the world established by the previous Men in Black films, there are mild ovations to the way things have changed in the intervening twenty-odd years. But in reality, little has changed. This time Tessa Thompson’s Molly provides our point-of-view character, as she successfully sneaks into the MIB head quarters in New York and impresses Agent O (a returning Emma Thompson, from MIB 3) enough to warrant probationary agent status. She’s given a dynamite suit, a pair of sunglasses, and is shipped off to the London HQ (the film does its best to earn the “International” moniker), given no more instructions than “something fishy is going on.” For little more reason than that she finds Chris Hemsworth’s Agent H rather studly, she soon finds herself embroiled in what appears to be a massive intergalactic conspiracy, but what proves to be more the equivalent of a sad fart of mistaken identity.

There’s solar system destroying weapons, of course, secrets, betrayal, aliens aplenty, and a surprising amount of murder. But missing from the movie is any hint of the original film’s winking goriness, black humor, or sense of play. Every moment of humor in the film lands with a dull thud. Between these unhappy, oddly paced attempts at quirkiness are more dropped plots and beats than it’s possible to keep track of.

Is Chris Hemsworth’s Agent H an incompetent, feckless cad, or is something else lurking beneath the surface? Did something happen to change him the night he “saved the world” three years prior to the film? What about his casual yet paternal relationship to Liam Neeson’s Agent T? The film goes out of it’s way to show H as never anything less than selfish, cruel, and manipulative, but while it barrels towards the obvious conclusion drawn from this behavior, it actually manages to outwit itself and pull out instead a twist that’s so much more obvious that it’s insulting. It’s a wonder that he’s treated as the second lead at all in the film. If the movie fulfilled what it seemed to want to do with his character, it might have come across as a neat subversion to use the doofy charm, excellent comedic timing, and unending handsomeness of Hemsworth to a subversive affect. As it is, it just feels like an abuse of what there is to appreciate about the man as a performer.

Competing with H’s ribald and confused “arc” through the film is Agent M (Tessa Thompson’s designation) becoming acclimated to the Men in Black. We never really get to enjoy these moments of wonder as Thompson fulfills her lifelong ambition to join the organization, but they exist in brief snatches. Thompson, one of our ablest performers, does her best, but the film, as well as her character, seemingly stitched together from half a dozen scripts, fights her every step of the way.

Also along for the ride are Kumail Nanjiani as a small sidekick who’s toyetic value cannot be understated, and an unrecognizable Rebecca Ferguson. The misuse of Ferguson in films not of the Mission: Impossible variety is frankly reaching Christoph Waltz-Not-In-Tarantino levels. One of the most engrossing and fascinating screen presences working today runs around in a bad wig in a foray into the movie so perfunctory that it’s shocking that it wasn’t cut from the film. Even more shocking was when Wade Eastwood’s named emerged in the credits as the Second Unit Director. Eastwood has been the stunt coordinator for the past two Mission: Impossible films and clearly has an exceptional head on his shoulders for action and stunt work, but outside of a few mild moments of particular physical acumen, there are no exciting action beats to speak of in the whole movie.

It’s hard to even wonder if there are the bones of a good film underneath the misshapen hulk of Men in Black International. It seems difficult even to blame director F. Gary Gray, recent of making the kickass Fate of the Furious and the Oscar-nominated Straight Outta Compton. This is a movie already working with an incoherent script, that gives all impressions of being studio notesed into oblivion. Men in Black International is more like a boneless desiccated corpse, then, shambling through the motions of the original film’s life as a vibrant and fun little movie while understanding none of what made it special.