Trying to have its blue milk cake and eat it too... 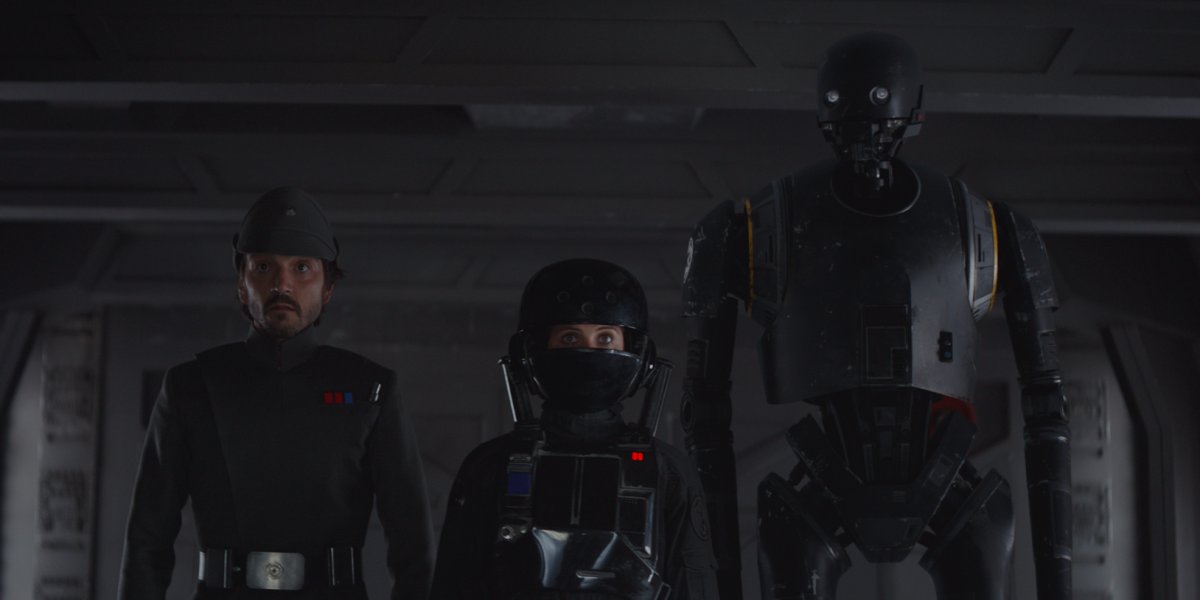 Rogue One – A Star Wars always had its back against the wall, before it even knew there was a wall to be wary of. The last time the prequel well was drawn from, a trilogy arose with such furious anger from the fan base that many dare not utter names of those entries, even today. This time around the film fares far better, yet still manages to undo a lot of good will by repeating the missteps of old. It needn’t be said, but with a property like this, even the mildest of spoilers may follow.

If there were ever any illusions that Rogue One wanted to simply be “more of the same”, the start of the film dispels the notion by doing away with a series mainstay, but only momentarily. Faster than you can say “womprat” we are given glimpses of farm life, blue milk, and a child whose life is irrevocably worsened due to Imperial interference. Jyn Erso (Felicity Jones) is a little more dour and hardened than Luke or Rey before her. Running and surviving has been her call, as opposed to the plucky wonder that embodies the aforementioned individuals. She isn’t alone in the new character department though, and diversity amongst the cast is one of the brilliant strokes this go around. This idea isn’t limited to the main cast with nary a corner empty of some creature, cretin, droid, guard or other. It’s Star Wars through and through, with a sense of creativity and excitement around each corner and upon each planet.

Truth be told, Rogue One doesn’t want to just embrace the Star Wars of old — it also wants to bring in adventure stories of old, mostly of the “men on a mission” mold from the days when war films filled the screens every few months. There’s a grizzled vet in Cassian (Diego Luna), sardonic reprogrammed droid K2S0 (voiced by Alyn Tyduk), a defector pilot (Riz Ahmed), the force obsessed and blind Chirrut (Donnie Yen) and his friend/guard Baze (Wen Jiang). Everyone gets their character beat, with the exception of Bodhi, the defector, who is severely underwritten. We never get a handle on who he was before he got mixed up in these events, or why he was so entrusted with his duty. Standing out above the others, though, is the relationship between Chirrut and Baze. Like a battle tested old couple, they complete and lift up the other. “There are no more Jedis, only dreamers,” Baze says in reference to Chirrut’s literal blind devotion to the force. As played by action legend Donnie Yen, Chirrut Imwe can not only take on numerous Stormtroopers single handed, but he elevates quieter emotional levels, few that there may be.  Each of the motley crew are followed as they are thrust together by fate, then kept together by the staunch belief that they can do the impossible. The crux is that the film (or studio more so), doesn’t agree and feels the need to litter the film with numerous distractions.

Since this is part of the Star Wars franchise, it is to be expected for a little bit of fan service to creep it’s way in, but the level Rogue One goes to, feels as every scene will end with another nod or wink. During production there were numerous rumors of rewrites on set and studio mandated reshoots. What tinkering may have gone on is more than apparent, but judging by general audience reaction, they are eaten right up. An instance here or there would suffice, but when a film cries for fifteen to twenty minutes to be shaved off its runtime and that can easily be gotten to by deleting references and threads to other films, it may be a problem. True, to play Devil’s advocate for a moment, there is the unlikely chance that this is someone’s first exposure to this world, full stop. One could guarantee without the excess of these scenes, this newcomer would be curious to see the rest of the story, for better or worse.

Thankfully, everything is saved by a rollicking second act that picks up the action tenfold. Once the heist is finally underway, some of ILM’s greatest feats are on display. It is honestly nothing short of breathtaking. The setting, colors and character beats all collide perfectly. Here, in the midst of action insanity, the Star Wars story gets boiled down to its most essential task: to entertain. Once the film hits these beats, it more than often feels like the movie may transcend these lighter trappings and be fully adult fare.  It’s a crime that the rest of the film tries too hard to make everyone happy, as unseen hands seem to be pulling at the strings, wanting to keep things jauntier with excess humor, adding in cameos here, cameos there, and a cameo by two characters who shouldn’t technically be in later films if we go by the events of Rogue One. All of this could feel more natural if it didn’t punctuate half the scenes of the film.

What doesn’t feel simple is the amount of screen time a CGI Peter Cushing gets. Existing somewhere between astonishing work of the current age and a horror show, the film knows Tarkin has to be on the screen & goes full tilt with it. Contrast this to the minimal, but essential, involvement of Vader (James Earl Jones beautifully giving it possibly one last go), who not only brings a menace to the story, but some of the films most memorable scenes. Yet, both of the characters aren’t the “villain” of the piece– that title belongs to the sneering Director Krennic (Ben Mendelssohn). He too feels just a bit off from those who surround him. Where as most of the other officers of the Empire are interchangeable, Krennic wants to desperately distance himself from the pack. His non-regulation cape is the first of several flourishes he brandishes throughout the film. It’s the most emotion we’ve seen from anyone on the Empire side in several movies, if just only he had more screen time.

It may sound like nitpicking, but Rogue One constantly feels at odds with itself. To see a narrative pivot on a dime, not only in the middle of a scene, but also conversation, just to place a small joke or reference to another film in the series, can easily take the viewer out of their experience.  None of this is to say that Rogue One – A Star Wars Story is a bad picture. Far from it actually. Just that more often than not, it keeps itself from being truly great. Anyone going into this film knows the general outcome, that the events that transpire will go on to reshape the course of history. Becoming invested in the characters and their journey to get to that point is all that matters with this film, and it just so narrowly misses the mark. The over reliance on rote humor drops, the excessive fan service, and forced romantic implications threaten to sink the ship at every possible chance. Thankfully there are enough moments of spectacle, joy, action and wonder  that the proceedings never dip into the territory of abysmal. Much like the ever present Empire, an outside force threatens to derail Rogue One, but as long as there is hope (as the film is often to namecheck), future installments can rise above these shortcomings and become something truly transcendent. As it stands now, Star Wars is here to say, and even in a merely decent capacity, that’s something to be excited about.

The Daly Planet: AUDITION Auditions For the Kryptonian... Previous
Things We're Digging This Week - Week of 12/12/16 Next