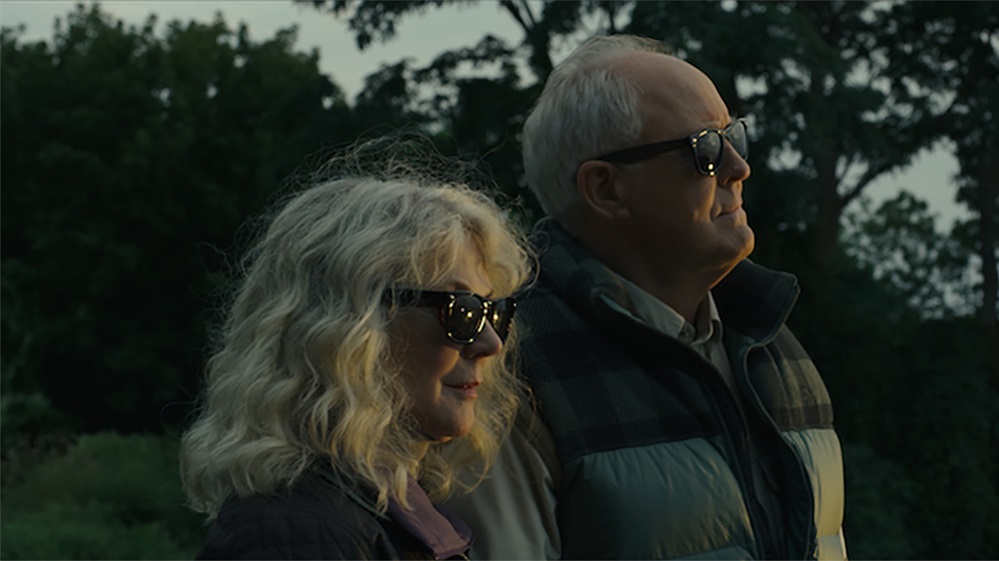 John Lithgow is one of the best actors of his generation, an incredibly well rounded performer who can shift between affable and monstrous at the drop of a hat. His talent alone was enough to convince audiences that at least one of the latter seasons of Dexter wasn’t completely rancid hogwash — a truly herculean achievement that not even the likes of Charlotte Rampling or Ray Stevenson could accomplish. There’s almost nothing I wouldn’t at least give a shot that he stars in, which brings us to his latest: The Tomorrow Man, a mumblecore-but-for-the-AARP-crowd dramedy where he plays a doomsday prepper who falls in love with a hoarder.

Which is about all that needs to be said about the film’s narrative. It’s a pretty straightforward film, content with abiding by conventions of the genre. Blythe Danner co-stars as Lithgow’s paramore Ronnie, providing enough mania to that it’s conceivable that she could fall for someone so clearly unwell as Lithgow’s Ed Hemsler. The pair have strong chemistry, and you eventually do buy into their romance despite Hemsler’s clearly destructive and self centered behavior. We’re also introduced to Ed’s son (Derek Cecil) and his family (Katie Aselton and Sophie Thatcher) who have little to no patience for his constant blathering about the impending end of the world as we know it, much to his irritation. Let’s just say Thanksgiving for the Hemslers isn’t a calm, breezy event.

What winds up being the true star of The Tomorrow Man is Noble Jones’ ability behind the camera. Working as his own cinematographer, the directorial debutant manages to showcase overwhelming talent without feeling out of place (this is a quirky drama after all) or too unnecessarily braggadocious. From the very opening frame, Jones is telling a full story merely with his mise-en-scène. Just the way he frames and lights Ed and Ronnie’s two vastly different homes is communicating more to the audience than any dialogue ever could.

Sadly, the film’s writing, also attributed to Jones, is not nearly as well executed. It runs at an absolute snail’s pace, making the ninety minute runtime feel twice the length. Character conflict either is hollow or arrives too late in the narrative structure to breathe. A traditional film of this nature would see the strain of the odd-couple relationship cause a fracture between the couple somewhere in the beginning of the third act, but here it doesn’t happen until somewhere around ten minutes before the end. It’s one thing to try and subvert or play with structure in a meaningful way, but The Tomorrow Man doesn’t seem interested in that, rather it’s just comes across as poor construction.

Similarly, neither Ed nor Ronnie have much character growth for the first hour and change, leaving all of that development to the final few minutes. Lithgow and Danner are doing everything they can to convey their growing relationship, but so much of the film feels staid and the characters feel static for long stretches until they abruptly have evolved. There’s also an issue with the film’s tone, which feels like it needed to hew either darker or lighter, but settled to try and be mildly idiosyncratic causing the proceedings to winds up coming across as cloying in its attempts to be eccentric and weird. It does end on a pretty incredible note, however, providing a final minute-or-so that almost makes the previous ninety minutes worth it.

Almost being the operative word there. The Tomorrow Man is beautiful to look at and Lithgow is as great as one would expect, but it just never finds its footing. It’s a sloppy and cliched story that only comes to life when Jones finds a way to let his camera and the performances carry the load. The moments of silence in the film click more than the dialogue-driven aspects, which isn’t a good sign for a film like this. The Tomorrow Man isn’t bad, but it’s remarkably bland for a film that seems to think it is anything but.