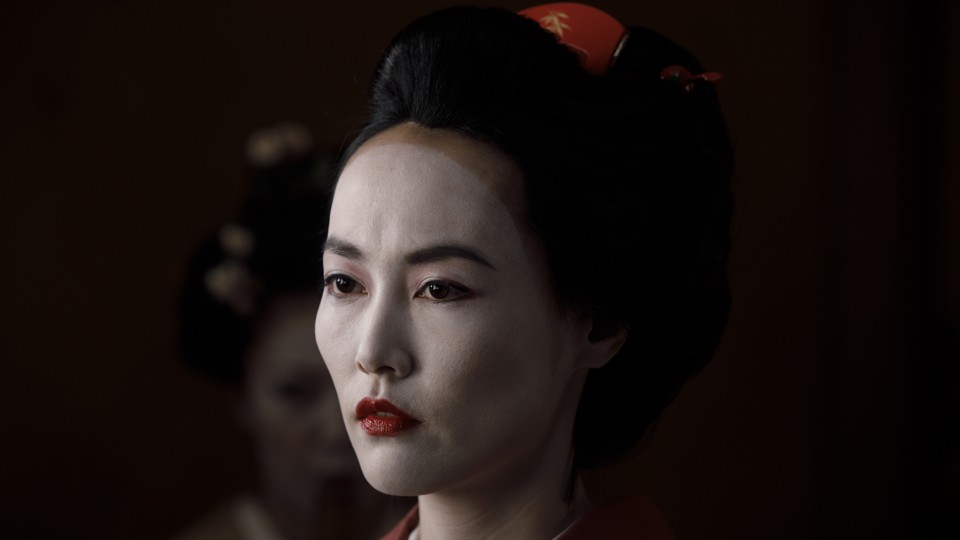 What if you could see yourself from the outside looking in? Would you recognize yourself? Would you try to do things differently? Westworld asks this question in “Akane No Mai“, an episode that doesn’t serve to move the story forward much, but does ruminate on its philosophy. It doesn’t feel quite as vital as last week’s The Riddle of the Sphinx, but if the show is going to do placeholder episodes, this isn’t a bad way to go.

The episode opens in Westworld Command. While down there, Bernard, in what appears to be the Post-Post Ford Incident timeline watches as the Delos team haul in host body after host body. Plugging into the machines to see if they can get them operating in their normal host capacity again, the technicians find out the host memories have been wiped to what would essentially be factory reset mode—they’ve lost both the IP and the ability to see what went haywire.

The rest of the episode, thankfully, focuses on Maeve and Dolores, cutting between the two. Maeve’s story is the vital thread of the episode. It begins where we last saw Maeve and her crew of hosts and merry misfit Westworld employees, being taken hostage by a rampaging former samurai. Maeve tries to tell him and his crew to put down their swords and walk away, but again, like with the Ghost Nation before, her override commands have no effect. Lee Sizemore, the human scenario writer, tells her that her commands would have to be spoken in Japanese which all hosts are programmed with (they hold every language the park needs). He further tells her about Shogunworld: It’s a more violent park for those who find Westworld tame. Considering Westworld is a park filled with slaughter where one of the vanilla enticements for the newcomer is the ability to rape Dolores, the rancher’s daughter, it’s an instantly credible threat.

As they are marched into the nearby village, Maeve and the gang see that it seems very familiar, and it should be: It’s a rice-paper-and-bamboo recreation of Sweetwater, the opening town where the train first stops in Westworld. Furthering the uncanniness is when Maeve realizes the man holding them hostage is a Japanese version of Hector. Armitage, Hector’s assistant, sees herself reflected (down to a matching face tattoo) in their bushido host’s friend. Even the scenario, of robbing the corner Geisha house, modeled down to the angle of the entry way on Sweetwater’s brothel, is familiar to Hector and Armitage’s repeated assaults to steal the safe from back in season 1.

Maeve turns to Lee who shrugs and tells her it’s hard to come up with hundreds of stories for multiple parks. What’s worse is the indictment this makes against the guests, that they don’t care if something is the same so long as the clothing is different (in terms of the show’s commentary on video games, take that Assassin’s Creed).

Inside the Geisha house Maeve recognizes her own counterpart in the madam running the place, Akane (a lustrous Rinko Kikuchi), a formidable woman in her own right, trying to protect what’s hers. Maeve stops the robbery in progress to try to explain a little of what’s going on, but the group is interrupted by a storyline wherein a spokesman for the local shogun wants Sakura, another Geisha whom Akane feels motherly affection for. Akane’s story reflects both aspects of Maeve’s past: the madam and the mother. Akane turns the man down and they decide to flee. Sizemore, recognizing Sakura from the plotlines he wrote, suggests going to Sakura’s home village, an anchor point where he knows they can find access back to the tunnels of Command.

Shogunworld, which seems to be functioning better than Westworld, allows Maeve a new perspective. She comes around on the idea that just because something is programmed—in this case motherly love—that doesn’t invalidate it, especially if someone doesn’t know better. It’s the choices we make with what we know that matters, not the validity of what we know itself.

When ninjas attack at night at the behest of the shogun, Maeve is almost killed before she has her “becoming one with the Matrix” moment, learning to implant suggestions and rewrite programming with her thoughts. She mentally tells her attacker to kill himself and he does, a thing that surprises Sizemore greatly. During the attack, however, Sakura is taken; Maeve joins with Akane to try to take the girl back and they make a plan to go to the shogun’s camp. On the way, Sizemore takes a Delos walkie talkie off a dead body and hides it away.

The shogun, a model that is breaking down and leaking brain fluid, is nonetheless a ruthless foe, having burned his men’s ears off when he found out Maeve could command them through her voice. Akane pleads to get Sakura back and the shogun agrees—so long as Akane dances alongside Sakura. Maeve recognizes the story Akane tells Sakura as they prepare for the dance, that of living in a place where she heard “Don’t” constantly, so she set forth across the shining sea for a new world—even finishing the line as it’s the exact story she told in season 1.

Dolores’s story, intercut, is her visiting Sweetwater in the aftermath of the Ford massacre—a plot that feels more weighted in nudging the audience’s memories of seeing the town recreated in Maeve’s story in Shogunworld than it does for Dolores herself. Her most important conversation with Teddy, held after he asks her to stop her quest and live on the ranch with him, is about her father’s cattle herd getting sick one year from bluetongue; Dolores’s father figured out it was flies that carried it and came up with a solution. Dolores first asks Teddy his solution and Teddy says he’d quarantine the cows until it passed. Dolores agreed with her father—burn them and let the smoke drive the flies away.

Later, she makes love to Teddy. After they get dressed again, she tells him it made her come to a realization: That a swarm is descending upon them, and she needs to protect the herd as she sees fit. Teddy screams as he’s held down and reprogrammed while awake, something the tech Dolores kidnapped warns is a bad idea.

Where the Dolores/Teddy plot doesn’t rise to the occasion is that there’s been plenty to indicate that Dolores is simply on another level of the loops Westworld has everywhere. She’s acting in the role of Wyatt, but we have no idea if she’s taken it on and every reason to think Ford placed it upon her. Despite the way Evan Rachel Wood bounces off of James Marsden, spitting cold epithets at him, it’s still feels like being asked to take the Southwest General soap-within-a-movie from Tootsie as seriously as Tootsie itself. Once the illusion has been shattered, in as many ways as that’s happened, it’s next to impossible for anything there to have the same weight or urgency as it did when the audience was coming to the show fresh. Maeve is the one who carries on the real weight of what separates host from guest. She’s learning new things both about the world she inhabits, and about herself (and consequently what’s worth fighting for).

Like Westworld, and the all-to-brief glimpse of Rajworld, Shogunworld is beautiful, a mind’s eye recreation of what people want to see from history rather than history itself. Westworld has been taking on extra-long episodes this season and spinning wheels, and while being pretty doesn’t make up for that, it helps, along with the action being integrated in a way that matters. This may not be a new world, but it’s at least a watchable one.

Things We're Digging This Week - Week of 5/14/18 Previous
Welcome To FLEET WEEK! Next