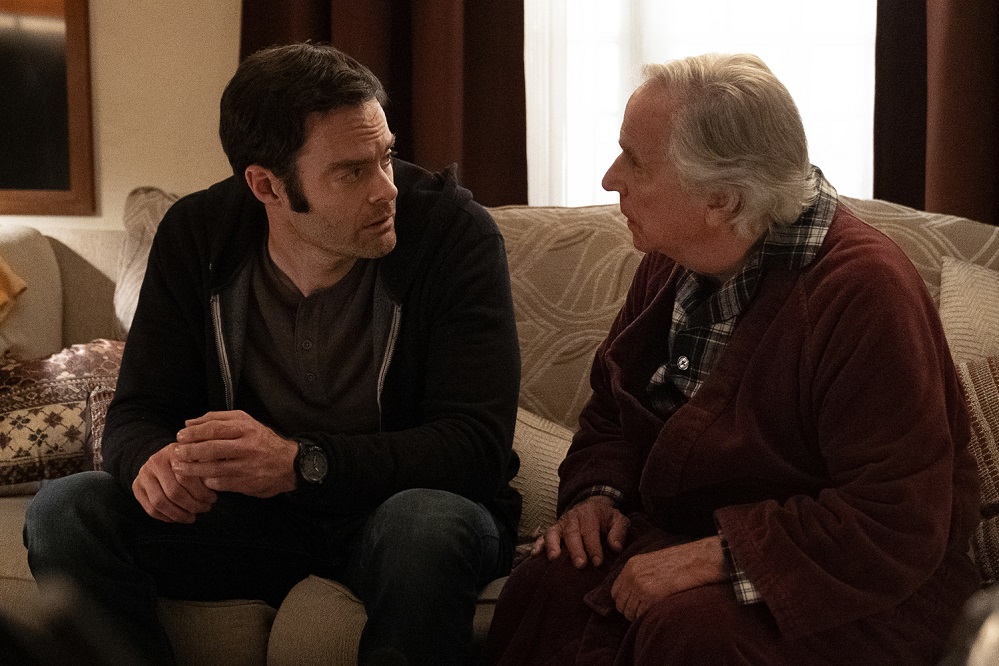 Bill Hader and Alec Berg’s Barry has always been a black comedy, be it when dealing with criminals and assassinations or, as tonight, when the concept of Los Angeles itself rears its head. The fourth episode of this season, “What?!” is an even further dive into the world Barry has cultivated and how depraved it can be from almost every angle, taking the fun to morbid lows. Los Angeles being a transactional hell hole (and as someone with a few failed pitches, I can definitely confirm and commiserate) has been a running theme of the series and Barry takes aim at this amongst other things in an episode that deepens the characters in unexpected ways.

The episode opens on a close up of Barry’s murder-eyes that ended the previous episode, but pulls out to our friendly neighborhood murder-man sitting with Sally and Sam at dinner, watching as they joke in the manner of old friends. He gets confused that the Sam he’s meeting isn’t the Sam Sally wrote for him to play. After confronting Sally about it she comes clean: She never did stand up to Sam the way she does in the play, taking his abuse for years and running away one night after it became too much. Sally tells Barry that she’s guilty over presenting herself as a strong woman but Barry is immediately understanding of this, saying it’s what taking an acting class allows them to do. It’s Barry trying to pass off why he’s in the acting class onto his crush. He’s taking acting to remake who he is, remodel his past, edit it, and so he tells her that it’s an option for her. It’s Barry attempting to be empathetic, but there’s still a deeply wrong pathology behind what he’s telling her.

Later, Barry witnesses Sam watching Sally’s rehearsal of her scene and decides he’s had enough. Sam deserves to die for his transgression. He gets his gun and heads to Sam’s hotel to murder him but has to duck into an alcove when Sally arrives for her meeting with Sam first. Sally confronts Sam and we see he really is the guy she says he is—though he doesn’t lay a hand on her, his verbal assault here is enough to show he’s the type who easily could—and then leaves, having informed her ex she’s going to do the scene no matter what. Barry, high on adrenaline from getting himself pumped up to play hero (in a way Sally would never even discover he was responsible for if he did it right), flees and tries to talk to Fuches over the phone to calm himself down.

Fuches acts weird with Barry and tells him he can’t talk and that he’s going to block Barry’s number. With no one else to turn to, Barry heads to Gene Cousineau’s house. He sits down with Gene and they exchange stories. Barry reveals to Gene the real reason he doesn’t like to talk about his time in Afghanistan, telling him the tale of what really happened when his friend, Albert, got shot in the Korengal Valley. Instead of giving a rousing Braveheart speech, Barry watched a citizen flee inside their home, assumed they were the killer, and went into their house and shot them to death in a fit of rage. He ended up in a psychiatric hospital until his discharge, courtesy of Fuches’s intervention. Horrified, Gene tells Barry to never reveal that story and in turn talks about how bad of a father he’s been to his own child. When Barry asks if Gene believes people can change, Gene tells him yes. Then he promises to help Barry work through his past—a past he doesn’t know recently involves his late girlfriend, Detective Moss. The scene ends on a moment of grave-morbid humor: Gene goes to get his ledger so he can charge Barry for the private sessions Barry’s clearly asking for.

Barry goes to see Fuches in person to tell him about his breakthrough, his new belief that he can change simply because Gene told him he agrees that people can, and spills his guts. While he’s talking, Detective Loach comes out of the back room. Confronting Barry over the murder of Detective Moss, Barry knows it’s all over for him. Loach holds up his phone and shows Barry a photograph. Confused, Barry looks. Loach informs Barry that the man in the photo is his ex-wife’s new lover and if Barry will kill the man, Loach will make the Moss business go away. Barry responds: “What?!”

The episode ties into the show’s constantly transactional Los Angeles where almost everything is for sale or trade, from heartfelt conversations to murder for hire. It also reveals new depths to Barry’s psychology, not only in how dark his past really is, but in how he can so easily lie to himself. He can recommend the fake-it-till-you-make-it philosophy of acting to Sally to rewrite her past and then giddily have it be confirmed by Gene, a man he thinks of as a father and font of wisdom, even if none of it is true. It’s only being forced to confront who he really is that makes Barry question that idea. What, indeed.