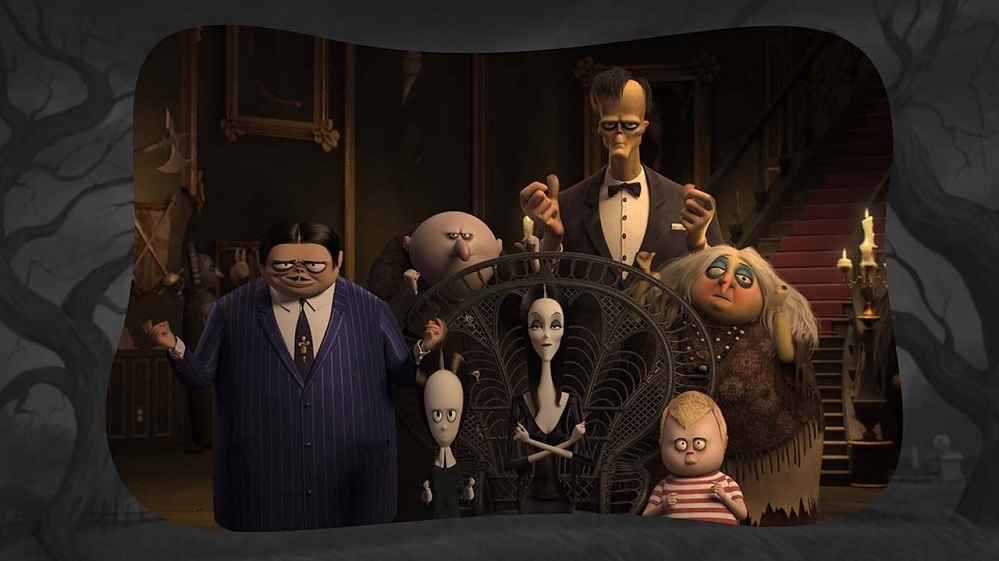 The frustrating part about The Addams Family is that all the individual pieces should be perfect. Oscar Isaac was born to play Gomez Addams, and Charlize Theron is great casting as Morticia, even if both were probably more suited for live-action than voice work. The Sausage Party directors seemed like the right fit for a project like this, being able to combine animation with quick-witted humor. Going back to the original cartoon’s character designs is an inspired choice that cleverly separated this version of the Addams Family from the previous live-action version. There’s plenty of aspects to this film that seem so impeccable which makes it all that much more painful that it doesn’t work at all.

The film opens with an origin story for the Family, as Gomez and Morticia are run out of their homeland on their wedding day, moving to America and holing up in a haunted sanitorium they turn into their mansion. 13 years later, they’re preparing for Pugsley Addams’s coming-of-age ceremony, the first time the whole extended family has been together since the wedding. Just down the hill from the Addams residence, a TV show host has built an entire HOA dominated, cookie-cutter, neon-pink community where every home is the same and all the townspeople conform or outcast. Wednesday, wanting to see the outside world for once, decides to go to the town’s middle school where she learns that she kinda likes the color pink and doesn’t want to be stuck in a cage forever.

The most difficult aspect to get over is that, even though the aforementioned original character designs are fun and theoretically give the film some personality, in 3D computer imagery they’re incredibly off-putting. They clearly were crafted with 2D still imagery in mind; in motion they’re grotesqueries that, well, only the Addams family would enjoy. Even aside from the designs themselves, the animation is just generally unpleasant, looking only slightly less shoddy than one of those CG mass-produced kids shows that make up the deep end of Netflix’s “Kids” categories.

Addams Family also suffers from every bad stylistic flourish that haunts so many 21st century children’s films. There’s the myriad of seemingly never-ending musical interludes, including everyone’s favorite children’s song “Green Onions” and a piano rendition of the theme song to Mister Rogers’ Neighborhood (because someone said the word “neighborhood” in the previous scene). Snoop Dog is here too as Cousin Itt—not that you could tell given his voice is so processed beyond resembling actual verbiage—so naturally there’s a “Drop It Like It’s Hot” needledrop for his character introduction… even though someone born when that song came out would almost be old enough to drive.

There is similarly a depressing amount of lazy jokes and innuendo that litters the film. It might be targeted at children, but The Addams Family’s sense of humor is absolutely aimed at the middle-aged parents taking their kids to the movie. The film’ first joke is making fun of New Jersey, something every schoolyard moppet loves telling their buddies. Does Thing search the internet to satisfy his foot fetish? You betcha. Is Grandmama just itchin’ to get plowed by Lurch? Pop culture references about It and Watchmen? Are there not-so-subtle allusions to Uncle Fester being a pedophile? Obviously! The kiddos love jokes about sexual predators. There is one absolutely killer joke that opens the film where Morticia uses her parents ashes as different shades of makeup, but I’m honestly struggling to think of a single other gag that was worth remembering.

I feel a bit like a humorless scold criticizing a film for its slightly more “risqué” elements, but I’d be much more forgiving if the jokes were actually funny. It’s all just so inert and unappealing at basically every level. It all just feels so phoned in and airless. Even the film’s messages of non-conformity feel rote and tiresome, having been handled better and more artfully in a dozen other animated films already.

Honestly, the aftermath of Matt Singer’s Addams Family IHOP menu experience was probably more enjoyable than what this film ended up being.