Condolences to the family of Emmett Till 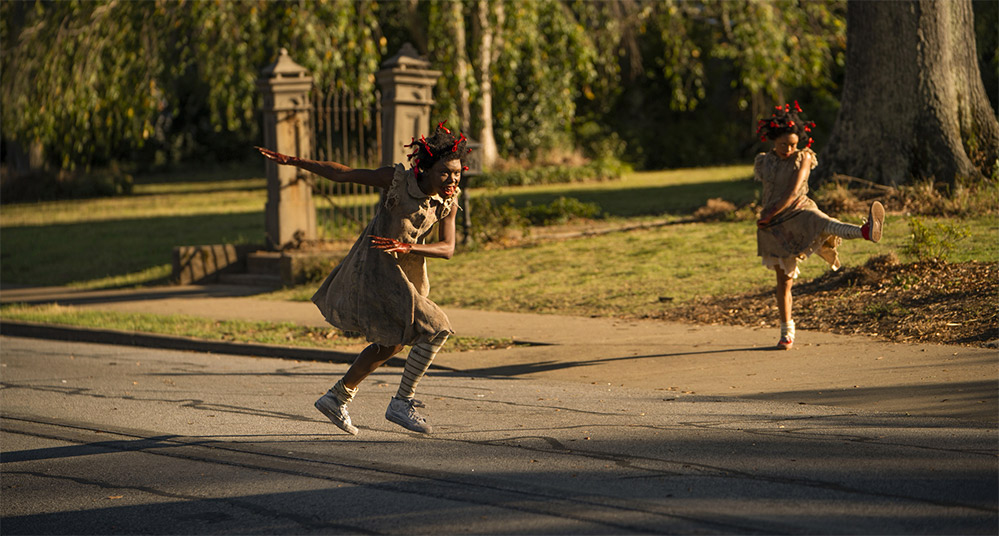 Lovecraft Country, since the pilot, has been choc-a-block with nods and references, from Jackie Robinson to “I Am’s” wink at Bessy Stringfield, the first female African American motorcyclist to cross the country. “Jig-A-Bobo” opens on the reference taking center stage, with the Freeman family and their friends all gathered amongst a crowd of other sweating, grieving African Americans as they wait during a particularly brutal day to pay their respects to the body of one of Dee’s recently murdered friends, Emmett Till. It’s the type of thing that’s immediately gut wrenching—just the black and white photo of the boy sitting on an easel, fedora jauntily perched on his head, warm smile forever frozen in time is enough to make anyone even passingly familiar with the story feel their heart break into pieces.

For Dee, whose mother Hippolyta is still missing, it’s too much altogether and she runs off. She comes face to face with Captain Lancaster (Mac Brandt), perfectly cast with a pinched, suspicious look, the big bad Chicago cop who’s been causing so much grief to the Freemans and to Christina all season long. He asks about Diana’s Orynthia Blue comic and if she knows where the orrery is, but only after doing a magic spell that causes her to first exclaim she can’t breathe—an all too horrific and horrifically familiar statement we hear these days whenever cops stop Black people and literally go for the throat—before he baptizes her with his own spit to what effect she doesn’t yet know.

Meanwhile Tic is meeting with Christina and exchanging the key he picked up after events with Hippolyta went down and exchanging it for her telling him about how to cast spells using the language of Adam—she tells him about the symbol of protection he’ll need in order to get the magick to work as he would like. When she returns home to Ruby, now done up as William, they make love with Ruby taking the potion to turn into a white woman before reverting back. Ruby confronts Christina afterwards and asks her if she feels as much hurt as she does about Till’s grisly demise and Christina unflinchingly tells her that she doesn’t; moreover she tells Ruby that Ruby herself doesn’t either—that she, like Christina, just wants what she wants.

Dee, running back and forth around Chicago, has found out the extent of Captain Lancaster’s spell: she’s confronted at every turn by two shark-mouthed pickaninny caricatures off of an Uncle Tom book cover the family has at home. This gruesome twosome chases her around town as she stays one step ahead of them—barely. It’s based on a section of Matt Ruff’s novel called “Horace and the Devil Doll” in which Tic’s cousin Horace (another gender swap for the show) is terrorized by a doll that’s pretty much the same as the Zuni fetish doll that Richard Matheson cooked up to terrorize Karen Black in his Trilogy of Terror anthology movie. Once again the show has taken an idea that already worked perfectly and switched it way up.

Tic confronts Montrose again and asks his father if he ever cheated on his mother. Montrose tells his son that he had urges but never acted upon them. Then he relates a touching story about how his old church pastor was rumored to be gay, then arrested one Palm Sunday right at the pulpit, carted off to an asylum, and had his brain butchered as if he was a perverted demon. It’s the type of thing that if not related by an ornery old murderer would make his character incredibly relatable. As it is, Montrose is all of those things, so whatever part of the story he tells that succeeds does so on a meta-level by the sheer power and affection we have for Michael Kenneth Williams and not at all for the character whom he’s playing.

Tic returns to Leti’s house where he finds Ji-Ah has come calling. Leti can’t stand that he never told her about sleeping with a demon lady in Korea and Tic half-convincingly says he never fully understood what happened himself. Leti wants Tic to be safe, never telling him she’s pregnant. She goes off to meet with Christina and wants to exchange her photo negatives of the book of Adam for Tic’s safety—Christina, whose plans involve Tic dying at the solstice doesn’t agree, but is willing to offer protection to Leti instead. Leti, hand on her stomach, takes it.

Tic, with Montrose, talks about a paperback he got out of the dimension-hopping observatory: a book called “Lovecraft Country” and written by his son. He mentions that it changes things, like making Dee a boy named Horace or Christina a man or George surviving Ardham, but that it’s pretty close to the events that happened so far. Thus the series has hung a big old hat on all of its own stupid choices in adaptation as if it’s the real-world version of what happened in Ruff’s novel—a choice in meta-nonsense that adds nothing and serves to remind the canny reader of how far off track everything really is. Together they perform a spell but when no big noises or anything occurs, they think it’s failed.

For some reason now, the show which was at least marginally doing okay during this whole episode, decided to go off the deep-end in a literal way: Christina, seemingly reacting to Ruby’s earlier confrontation, has paid to men to graphically murder her in the same way Emmett Till was killed. They brutally beat her, shoot her, then lynch her with barbed wire and tie it off to a weight before throwing the whole shebang off the pier. She gets dragged along and sinks only to emerge moments later, first gasping and checking herself for wounds which have already magickally healed, then laughing uproariously over the whole thing. Why the show chose to be so respectful of Till in the opening then have a laughing white supremacist witch lady recreate his death in such an egregiously tasteless manner is anyone’s guess but whatever effect the writers thought they were going for wasn’t close to being achieved.

Montrose finds Dee battling what to him are invisible monsters, but what are real enough to leave bleeding gashes on her arms. At the Winthrop house, Captain Lancaster, in a last ditch attempt to get the orrery, attacks them with everything he’s got. As Tic shows up and the cops turn on him, Leti, knowing she’s protected, gets up to flee outside to shield him. But when the cops turn on Atticus, a monster like the woods creatures in the pilot spring forth and devour the whole force, Lancaster included. In the end, it bows its head under Tic’s touch. Turns out whatever he and Montrose did worked to some degree after all.

The show suffers from all the usual complaints made so far this season: the missteps in adaptation, the poor writing, the terrible LGBT treatment, the whole nine yards of its usual ills. Add to that the fact that it’s the type of series that manages to both somehow touchingly celebrate then make a complete and utter hash of the murder of Emmett Till in the course of a single hour and you really have the show in a nutshell: It doesn’t know what it’s doing half the time, and whatever it thinks it is doing, it’s not even close to achieving.